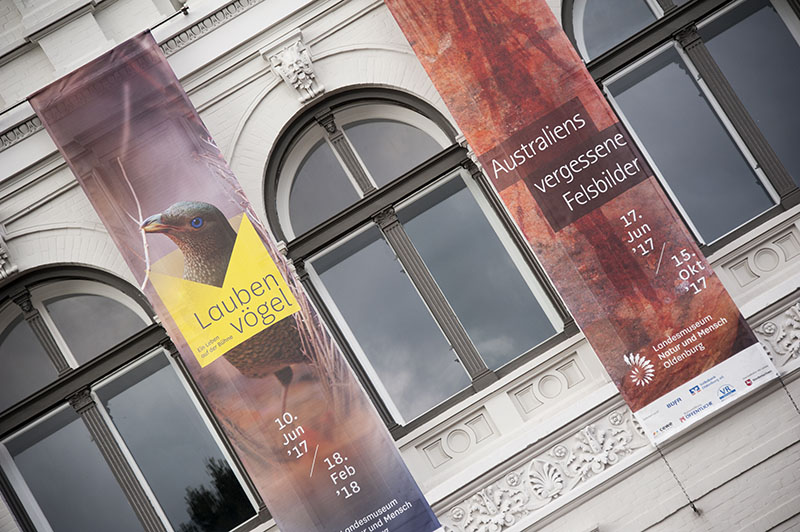 This morning saw us undertake the short motor that took us beneath the Cäcilienbrücke and through the Oldenburg lock into the Kustenkanal. A peaceful mooring was found just past the lock opening and only 3km from the Altstadt.

Work was being carried out on the opposite bank. At high water later in the day, it was totally immersed.

How is this for a drill bit?

Originally ‘Aldenburg’, Oldenburg is a beautiful town with a long history. Most of the old architecture has disappeared, but there is still enough to keep one’s interest.

These fellas were on the outer wall of the palace: we just loved the expression on the bison.

For the bike riders, there are also numerous cycling routes that lead you through this historical region – had we E – bikes, Bob and I would have been in on it, as the trails are quite long.

With few buildings in the old styles we have been so used to seeing – mostly Georgian appearance, Bob and I were quite surprised on discovering the city didn’t experience the devastation that the rest of Germany saw during WWII. It appears that the lack of age is just the result of progress.

A slightly different piece of art.

This image was quite sad. It appeared the family had either died out or moved away.

This was an interesting image in the interior of the 15th century church. Although the exterior remains traditional, the inner section is totally modern.

I couldn’t leave without taking this photo set into the corner of a building.

We were amazed to discover that an archaeological dig unearthed a large number of fireplaces that were dated as far back as the Mesolithic period, to the west of the township. The mind boggles when you do the maths, for that means people were living there between 8,500BC and 4,000BC.

Being situated on the Hünte was perfect for the early settlers and, later the town, as this was the point at which it was easiest to cross the marsh and moor between the Ems and Weser Rivers. By the early 1100s, a fortress had been erected on the highest point of the Geest so as to avoid the high tides. Within in just under two hundred years it was known as a major port.

During the 1600s, the region was ruled by the Danes, when the then king inherited the title ‘Duke of Oldenburg’, and by the French for a short three years during the early 1800s.