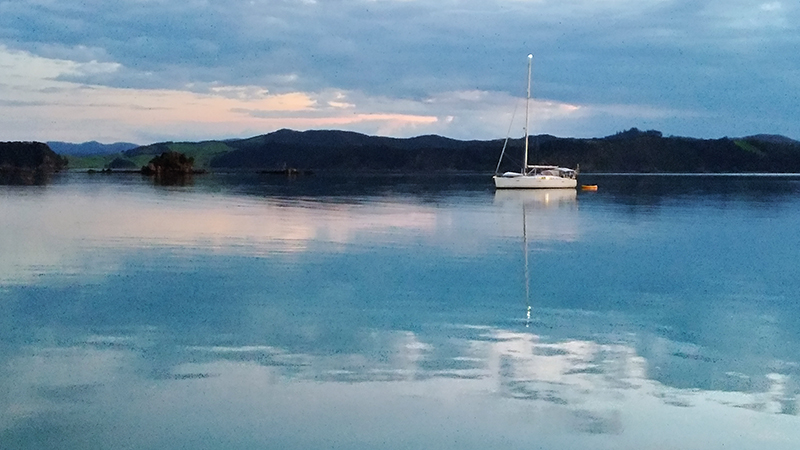 Having returned to Paihia, a dinghy ride into the township to stock up on fresh food led us to the local Countdown: how shopping had changed in a few short days!

A Covid reducing Level 4 lockdown in New Zealand meant  a guard stood at the shop entrance. A minimum of ten people were lined up in single file with a good two metres or so separating each. Standing in place at the end of the line to await our turn, the guard approached and informed us only one person from each household could enter at a time.

No longer able to head into the shops as a group, Bob drew the short straw and lined up, whilst the remainder of us returned to the beach to watch life pass us by – not an unpleasant past time at all.

Returning to Australis 1, the Iron Main roared to life and the bow pointed towards the Bay’s islands once more.

In a first, the wind was from the right direction and Bob was eager to put the full rig through its paces. With a different winch arrangement to that on Gratis, from our short sojourn with the previous owners, I remembered there were a few glitches to look out for. As a result, I was a little more cautious since the Bay of Islands provides a large number of obstacles for the uninitiated and I wasn’t prepared to find them. It took a little talking, but he finally came round to my way of thinking, and relieved was I for that. This day, the lone genie would fly!

I was watching Cliff as he winched the genie open and a good thing I was, too. As it wound around the winch, the sheet commenced entwining over itself. At a command to stop from myself, the winding was brought to a rapid halt and the furler jammer closed. Sheet unravelled, all systems were readied to go – with fewer wraps on the winch. Success this time, as with Genie fully unfurled, Australis 1 was soon moving at a massive 4.5kn.

Shallow water and underwater rocks ahead, this was to be a short tack, and with the two foresails set close together, we chose to err on the side of caution by totally furling the sail, undertaking a 90° turn to starboard, then unfurling once more.

Giving to the word to wind in to enable the manoeuvre to take place, the guys commenced the furling. More headache!!! This time it was the furling line that looped over itself, and proved a little more difficult to free. Releasing the sail to slow our forward propulsion, Bob and Cliff headed to the bow where they took hold of the furling line a short distance from its drum. Pulling a proportion of the rope out, the pressure at the winch was released. With Bob continuing to hold the line in place, Cliff returned to the winch in question – the furling jammer was on, which meant no fingers would be caught in the ropes – and unwind the line. On closer inspection, the boys realised the angle of the furling line was incorrect and this explained why the electric winch in the cockpit was used by the previous owners the day Bob and I sailed with them. On our return to Australia, some changes will certainly take place.

Sail in at last, Anne was now able to turn Saliander as planned, and the genie unfurled to starboard. There was now time to sit back and enjoy a relaxing sail towards the incredibly beautiful Manawaora Bay.

So many scenes in such a short distance was a sight to behold and the eye didn’t know where to look. The sail furled, Australis 1 motored across Manawaora into Orokawa Bay, finally coming to rest in the protection of the cliffs at the entrance to Assassination Cove.

What a protected anchorage this would be from the predicted winds to come.

The arrival of the evening hour saw the breeze die and waters cleared to pearl green glass. The silence deafening, as the rising moon cast a blue haze across the scene, the plip plops of fish became the music of the night as they dined on the insects flittering above the water’s surface.

Tapu: the word ‘taboo’ originates from the Maori word ‘Tapu’. Captain Cook added the word to his vocabulary and with a slight pronunciation difference, was accepted by the English populace when he returned home 1777.

Assassination Cove: 1772 French explorer, Marion du Fresne and a number of his crew were murdered – possibly eaten – and at least 250 Maori killed in response. It is believed he and his crew were fishing in a sacred place. Called ‘Tapu’ in Maori, it was off limits.

Note: to prevent confusion, Saliander will be referred to by her new name of Australis 1.