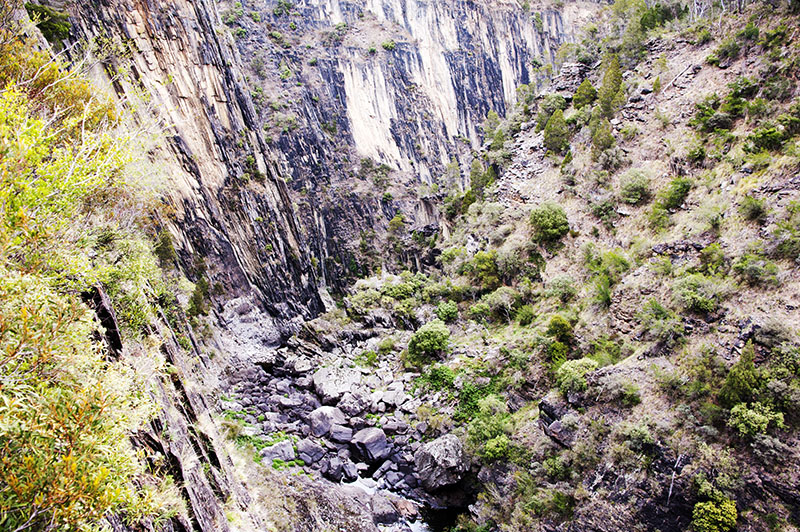 Today’s trip took us south east of Walcha to the Aspley and Tia Falls, and Mummel Gulf National Park.

and now forming part of the Oxley Wild Rivers National Park, the region is some 1,000 metres above sea level and covers roughly 120,000 hectares. Presenting with high rising gorges and raging rivers – in winter, that is –  covered by vegetation that is comprised of mostly dry rainforest variety a picture can’t do the area justice. Here it is also possible to sight the 900 plant species and some 385 animal species that include the rare Glossy Black Cockatoo, spotted quolls, and Brush Tailed Black Wallaby.

First stop of the day was Aspley Falls with its incredible gorge and hill creep.

Across a peaceful flowing creek bed,

then up we climbed to the top of the gorge.

Once it was possible to walk to the bottom, but when the steps deteriorated they were never replaced.

It was easy to note how crumbly sections of the side were. In parts, the track and viewing areas had been recently upgraded.

Fungi and moss enshrouded tree limbs were quite a sight to behold.

Round the rim Bob and I ambled, at one stage marvelling at how well hidden an opening was to the right.

As the paths continued curving round, few hundred metres further on the hidden spectacle came into view.

A short drive down the road was Tia Falls,

and how different was the vegetation and landscape.

Multiple cascades that would be an awe – inspiring sight when the rains came.

There was an exquisite view across to the coast.

On the cliff’s edge a lone gum held on grimly.

With some hours of daylight remaining, the decision was made to drive on a little further down to Mummel Gulf National Park and what a good decision it was.

As Bob turned from the highway and entered the park.

a much cooler swampy landscape greeted us

A couple of kangaroos even popped out from the trees to bound along the road.

Coming to the park’s end, a section through which a bush fire had razed was passed.

Our first day out and we were not disappointed!