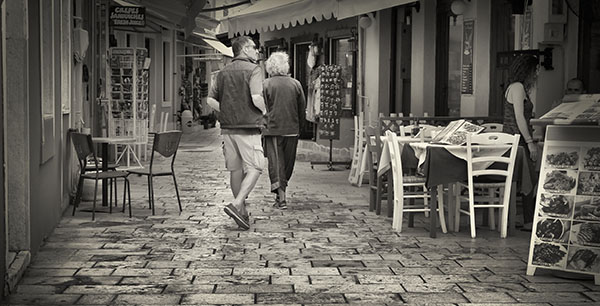 The expected weather change arriving sooner than expected, we departed Petriti for Paxoi (or Paxos as it is also known by) which was situated 7nm south of Corfu.

This little critter came along for a free ride.

Sadly our exploration of Lefkemmi, the old capital of Corfu with its Venetian styled buildings and canal, must wait until our return visit.

Low rolling hills and salt marshes lined the shore upon which small coastal fishing villages rested. At the southern tip of the island, a low cliff made of sandstone appeared. Here, scrub land surrounded lines of olive trees. To our left were towered the mountains of main land Greece: never in my wildest imaginings had I realised how mountainous the country was.

Yachts by the dozens were criss – crossing paths as they sailed, or motored, from one port to another. This was only spring, which left the mind boggling at what the water traffic would look like at the height of summer.

Three hours of motoring – the wind was on the nose, of course – and we moored in the small port town of Gaios.

To starboard nestled the tiny township, whilst to port the occasional house hidden among the greenery.

Turning Gratis stern to, Bob gradually reversed our girl until close enough to shore for release of the anchor. Anchor down and embedded, back she continued. With mooring lines in hand, once close enough to the pier, Anne and I tossed them to our new neighbours who kindly waited ashore.

Engine off, peace and tranquility greeted us as a soft murmur of conversation mingled with the soft sound of Greek music that played in the back ground. Little G2 lowered and tied to the bow, platform lowered, ashore we stepped.

Buildings of pastel browns, creams and white. Restaurants, outside of which were arranged brightly coloured wooden chairs and tables decorated atop with chequered table cloths. Not much appeared to have changed over the years.

The island itself is apparently famous for its olive oil and we read that Harrods only purchases and sells oil from here. Along the water front, just a few metres from our berth, was a small white building with a sign denoting he sold wines, oil, tobacco and spirits.

Walking in, was to step back in time. Timeworn rafters that had seen better days denoted the building’s age and vats filled to the brim with olive, corn or sunflower oils were dotted around the floor area; old scales, copper bowls and more greeted the eye. Taking a small glass in hand, the owner opened a vat which contained cold pressed olive oil. Pure and clear, Bob tasted: pure elixia! Fifteen euros bought us 1.5 litres of this delight.

A short walk around the township:

we just loved the finishing touches.

next to equally colourful boats.

Bob came across this massive razor fish shell: you don’t find anything like it in good ol’ SA.

I came across this beauty: