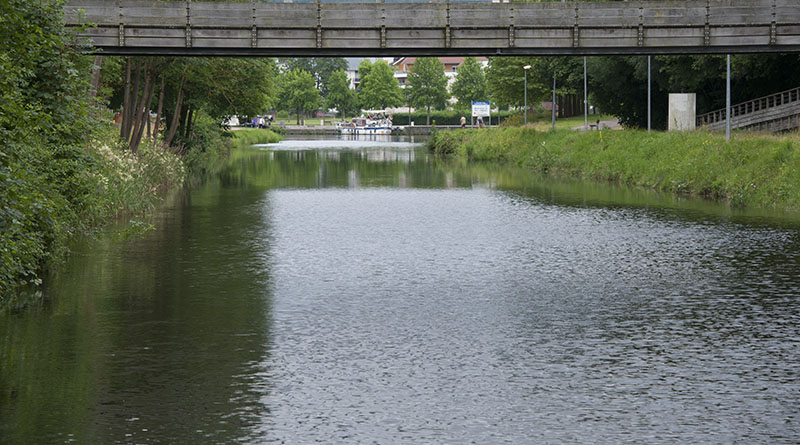 An early start – as starts went, that was when locks didn’t open until 9am – on a grey drizzly day, yet not that cool: a change pleasant change to the heat of the sun beating down.

The numbering system recommencing at ‘one’, the downward journey upon the Golbey Stair case – 15 locks one after the other – took place at Bois l’Abbe. At the dictate of the books we had rung the day before, to the surprise of the lock operators.

9am on the dot, the operating device was pressed, the gates opened and in Gratis motored. Tied, and ready to raise the starting pole, along raced a second boat. Two vessels easily in together, down we were lowered. Appearing rather new to the lock system, the other cruisers still working on developing their routine, significantly slowed our progress – not to worry, for that was our last year.

One after the other down we went, on occasions patiently awaiting boats exiting the lock ahead to pass us by.

Three and a half hours on, the fourteenth lock was behind us. Leaving the fifteenth until the morn, Gratis made the 35° turn into Embranchment d’Epinal, a small canal that once connected the shipping to the Moselle, and led us on a quarter hour journey into Epinal for the night.

The town itself was typically modern, and offered us nothing out of the ordinary to explore. That aside, at six euro for the night, water and power included, this was a pleasant stop with a good restaurant at the Capitainerie.