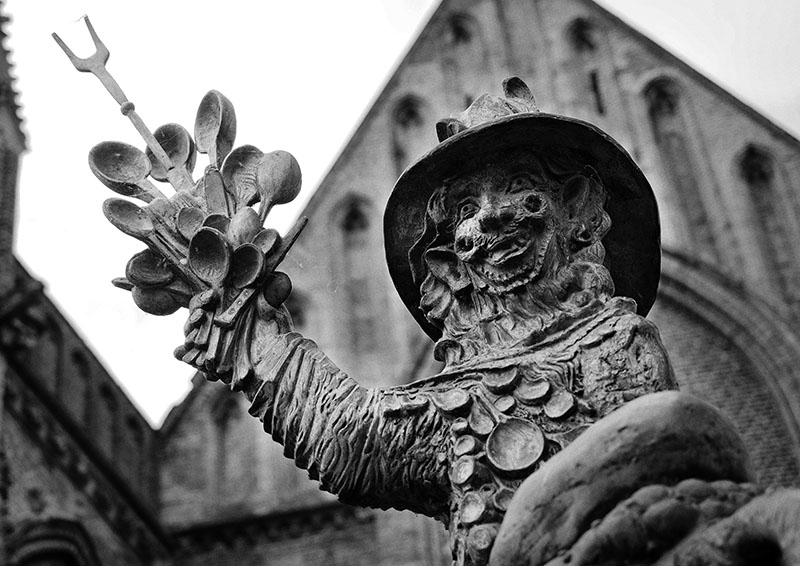 Situated in the low foothills of the Kemmelberg, a formation of hills in Western Flanders, and a mere fifteen kilometres from Fintele is the village of Poperinge.

Our destination for the day, our journey’s path also led us through some beautiful farming villages.

The township itself has some beautiful buildings, cells where British soldiers were held in preparation for their executions – 64 in total,

and some interesting statues.

It was in the battles near here that many Australian soldiers lost their lives and for us,

visiting the Lijssenthoek Military Cemetery in which they now lay, was a way of paying tribute to them.

A total of 10, 784 soldiers from some thirty countries are interred here. It also included a grave in which an unknown soldier lay.

A visitor’s centre on the site, provides a new angle on events by looking at them from the views of the medicos

who worked in the nearby hospital.

A calendar that alters each day, provides a story told by one of the wounded who happened to pass on that day.

For us, viewing the thousands of white head stones and crosses was more heart – wrenching and emotionally draining than the day spent in the ‘In Flanders Fields museum.

A section also focussed on the airforce: 36 of the 94 airmen interred in this cemetery died as a result of  plane malfunctions or accidents during take off or landing.

For me personally, these people who died so tragically young represent the worst side of humanity: the result of greed, jealousy, revenge and fear held by the leaders in power at the time! Even now, current unrest in several parts of the world are the results of divisions and repercussions that were put in place by the victors at the conclusion of WW1. Will it ever end, we wonder???