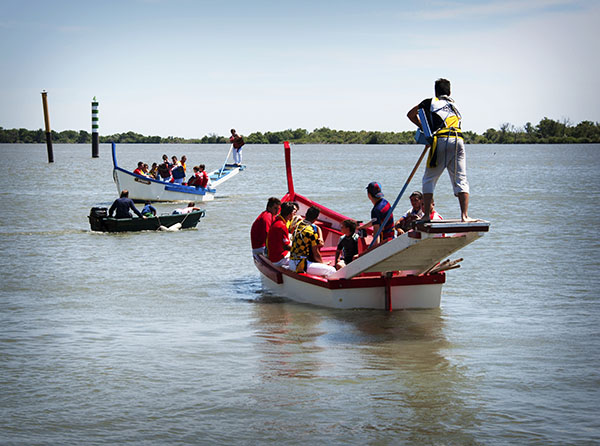 This morning the four of us caught sight of the Lock that allows boats to enter and exit the Rhone at work. Unlike the Garonne River, due to the mouth being silted, it is impossible to enter an other way.

Going for a wander today, Bob and I checked out Port Napoleon, the place where the mast would be removed, then stored. The Capitainerie was closed on Sundays, we discovered, but a lovely restaurant provided a scrumptious meal for lunch.

On the Rhone River, just outside the lock, we came across a Water Jousting competition, something that takes place each summer. On board colourful wooden boats that take the place of the horses, two teams vie for domination in this water version of jousting.

Each team sits in the bottom of their boat, whilst at the stern a helmsman controls motor speed and direction. The contender of the moment, lance and shield in hand, stands upon a sloping board that extends three metres out from the bow of the boat, and rises some metres into the air. As in horse jousting, the aim is to send the opponent plunging into the water below.

When each challenger is ready, the helmsman directs the boats until they draw level, whilst the competitors upon the board ready their lance for the joust.

It is at that stage that the adversaries attempt to thrust each other from the board.

The winner remains in place to wait his next opponent,

whilst he in the water returns to shore, and his next team mate takes position.

Meanwhile, a thrid boat motors around to assit in collecting bits and pieces that have gone flying…

A little research, and we discovered the true age of water jousting. Images dating to almost 3000BC were created by early Egyptians. The Greeks introduced the sport to Sicily and from there the sport was adopted by the Romans, French and so forth over the coming centuries.

We also found the magic water flow at which the Rhone River was closed: when levels attain 4200m³/s all is shut down.