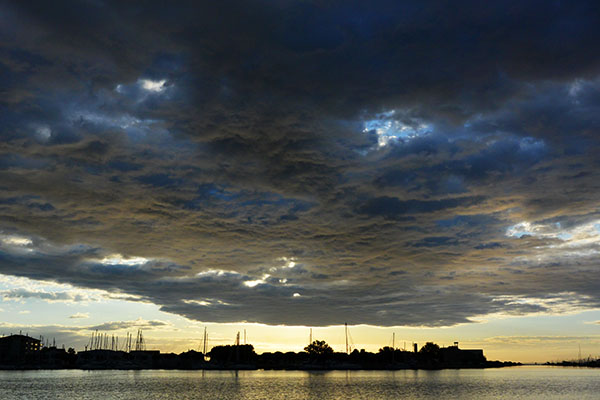 A 0530 start as we entered the lock at its first opening time an hour later. Radio call on channel 19: no answer, so we prepared anyway. In and looped around the poles set into the wall, it was a sedate rise compared to the canal locks of last year.

Into the flow of the Rhone Gratis motored. The river mouth no longer open, and with a lock system in place this was chalk and cheese to the fast flowing Garonde. Our concerns about the flood waters was put to rest  as its flow was only 2,400m³/s (all traffic is stopped at 4,300m³/s).

The first few kilometres was a mix of marshlands and industrial, with a ferry crossing for vehicles at Salin de Giraud.

Whirlpools here and there gently as the river bed significantly deepened for a short time.

At the 303km mark the navigable channel narrowed and our speed dropped to between 5 and 7km/hr. By 293km at its narrowest, the river was running at 10 – 12km/hr and Gratis three. You have probably guessed: Bob upped the revs to 2100rpm in order to maintain four kilometres per hour.

Arles, high bricked retainment along its banks, pier for filling with diesel,

two bridges plus an old,

a bend – the current strong: now there was a current which sent Gratis weaving for a short time!

Moorings poor, the decision was made to continue on to the first lock .

The river soon widened, Petit Rhone to port and a wetland now in flood to starboard.

Currents from both sides, adding to the fun, a gigantic river boat passed, pushing wash out in a gush!

In the coming kilometres, Cliff and Bob pitted their wits with the river. This was a hard run. Going upstream on the Rhone wasn’t that easy after all.

lock in sight, out came a barge!

Nine and a half hours after departing the Port St Louis lock Bob pointed the bow into the mooring for the Vallabregues lock.