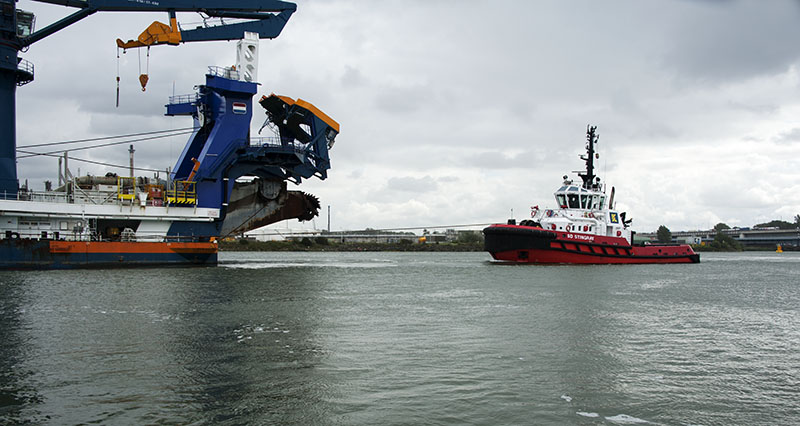 Having exited the Parksluis, into the Nieuw Maas went Gratis.

Heading west, our aim was to reach Hellevoetsluis by mid – afternoon.

Upon the Nieuw Maas, it is imperative that the VHF radio be monitored at all times, since the shipping on there is in proportions that defy belief. With the wash created by them, and with wind waves added into the mix, conditions were no fun! Those eleven kilometres felt like forever.

At long last, a turn into the Oude Maas River for a short 12km run, saw the river traffic significantly decrease, and the waters significantly calmed.

As the day went on, our plans underwent a rapid change. That improved weather predicted never arrived! Instead, it was a foul, cold, windy day, full of downpours that, by early afternoon, set into continual rain. As the wind continued to strengthen and small sharp waves developed, whilst visibility became minimal. It was time to call a halt to the day.

On the Spui River (all three are tidal, by the way) at last, the final 8km stretch took us to the boat haven in Nieuw – Beijerland.

Jackets on, out into the rain went Bob and I. Oh, the chill! Handling the water sodden ropes, it took only seconds for the fingers to become numb as Gratis was moored.

With our girl made fast, it was with haste that both of us disappeared into the depths of our girl, with the aim of not adventuring out until conditions improved.

As you can imagine, there are no images today!

Since departing Amsterdam, there have been few days without rain, so we have made the decision to head straight for Vlissingen then, with distances not being that great here, use the bikes and rail for travelling around on the good days. That being the case, a couple of more days and Gratis will be in her berth for the coming European winter.