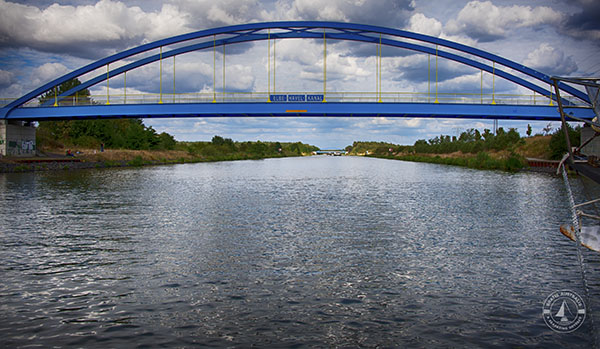 The planned stop at Hildesleben didn’t eventuate. Massive works bankside for kilometres meant no mooring areas were available to the traveller.

New bridges, walking paths, mooring, landscaping and a much wider canal – almost double its size within that section – will make it quite spectacular when completed.

Our day upon the canal, instead continued.

Past the locks that highlighted the entrance to the Elbe River.

Just ahead was a massive aqueduct – 918m long, 32m wide and 4m deep – that crossed the now sleeping giant and brought us to the commencement of the Elbe – Havel Canal. Only constructed in more recent years, the construction signed an end to boat traffic having to exit the Mittelland into the Elbe in order to enter the Havel.

As luck would have it, a rapidly moving barge raced up behind us as we were on the point of entering this art of technology. Red lights abruptly came alight, signalling us to halt. With just seconds to spare Gratis was tied to a mooring close by; then through motored the monster as it left us rocking in its wake.

Lights green, onward we rolled high above the Elbe.

Two kilometres on, the 20 metre deep lock which signed the end of the Mittelland Canal loomed. Radio call. Beware, many Germans still won’t speak English! It’s useful having a written script in German that enables one to request permission to enter and also simple one or two word phrases that only allow one word responses from the lock operators – such as ‘Ja’ or ‘Nein’. That aside, it’s amazing how quickly a language can be learned.

Out of the lock, the Elbe – Havel Kanal was entered.

A few more hours through exquisite countryside brought Gratis to the township of Burg and another peaceful night’s stop.

Another mile attained in our 1700km journey from Port St Louis to Berlin.