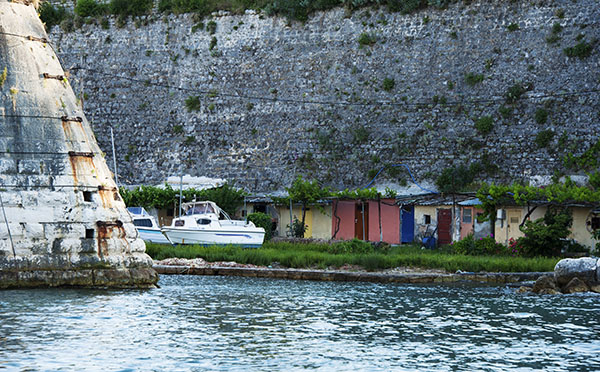 Hair cut for 5 euro and eyebrow pluck for 2 euro – what a difference to the $50AUD+ we pay for a trim in Oz and Europe. To put everything into perspective, the average monthly wage was $400 euro per month.

We departed for a mid – afternoon motor to the isle of Corfu: a land of myths, with centuries of history, rich in culture and, of recent times, known for Gerald Durrell.

Practically hidden within the landscape, bunkers utilized in the days of Communist rule.

Here, the famous mythological hero, Hercules, is said to have had his ship transformed into stone (supposedly a rock we passed close by along the way), whilst archaeological finds on Mt Ayios Matthaios place earliest man on the island as far back as 40, 000 – 70,000BC.

How mind boggling it has been to be exploring the region that myths and legends were made of! The need to pinch oneself takes place on a regular basis.

The mountains of mainland Greece made the nearby yachts seem minuscule in comparison.

Only a mile or two from shore, fishermen in their small boats dragged in nets they hoped were full to the brim with fish: a pipe dream in these waters of today.

Three hours later, awed by all we were viewing, Gratis arrived at the base of an ancient fort and entered Mandraki marina.

With good rainfall, green covered mountainsides – tiny in comparison with those of Albania – of palms, olive and Cyprus trees hiding under their canopies 400 species of rare plant found nowhere else in the Med beckoned us. We soon discovered the island’s vegetation was, on the whole, determined by man, as the Venetians realised early on the value of the wild olive and cultivated it into the tree we know today.

Over the centuries, Corfu’s position and wealth marked it as the perfect centre for trading, and as such found itself ruled by the Illyrians, Corinthians, Romans, Goths, Normans, Venetians, French (Angevins), Austrians and English in turn. It was only in 1864 that an agreement was signed, stating Britain was no longer the island’s protector. On the 21st May, 1864, the British departed and Corfu- along with the remaining Ionian Islands – officially became part of Greece.

Its citizens environmentally aware, today the island contains four regions – which Bob and I are looking forward to exploring on our return – along the coast designated as protected. Lefkimmi Salt Marsh; Antiniotte Lagoon – home of the protected European Otter – to the north; Korisin Lagoon with its cedar forest and rock like sand dune formations to the SW; and a coastal zone covering the east coast from Konomi to Mesongi with its reefs and sea grasses. We caught a glimpse into the latter as Gratis motored along the coast.