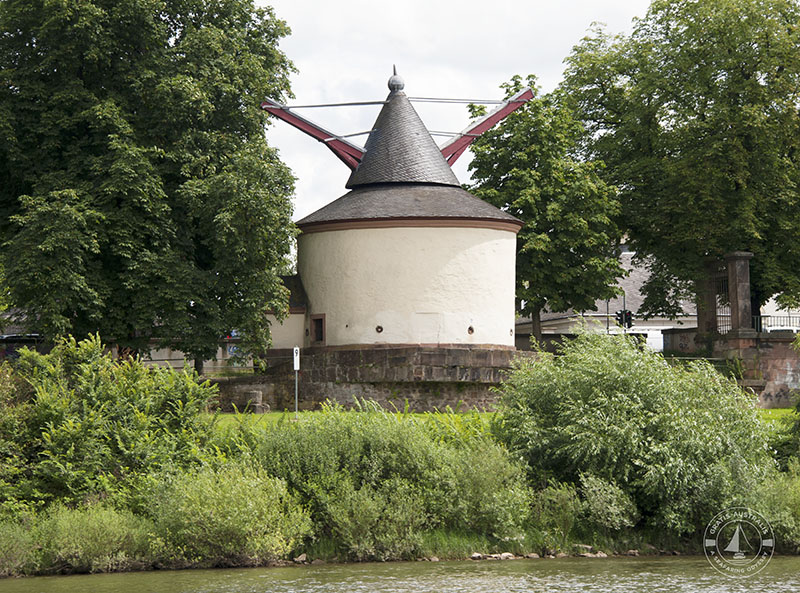 Coffee was had amidst the rocking swells created by the passing barges.

This was the land of the grapes. Hillsides steep, the vines grew in neat as a pin soldier – like lines.

Sadly, our planned stopover at the entrance to the Syre Gorge, Luxembourg, didn’t eventuate. On arriving at the entrance, it was with disappointment we discovered a low barrage of cement stretching across what was a narrow channel. Even had it been possible to enter, even Little G2 was much too large to use for navigation.

Despite this, we had still hoped to moor and wander on foot. Unfortunately, moorings along this section of river were few and far between, with the majority being for large river boats or those of a much smaller size than Big G. The decision was made to work our way to Koblenz, then hire a car and return.

A family of ducks entertained as they attempted to cross the Mosel by weaving between the river traffic.

In comparison to France, Germany is clean, tidy and well ordered. The sign posting for the new visitor is clear and precise.

Motoring this day was most pleasurable with only three locks to pass through. I had prepared a short spiel requesting permission to enter the locks in German and asking if they spoke English as our command of their language was miniscule. Only that at Trier created a problem with the lock operator not doing so. After that I made a small adjustment that included the information of us being Australian. As the weeks passed, for those who still didn’t come to our rescue and rattled off in their mother tongue at an incredible pace, a further adjustment was made by adding a few simple words that forced them down to basic communication: Ich komme jetzt oder später? (I come now or later?).

Coloured soils provided quite a contrast against the greens of the flora. At times, atrong wire was anchored to rocky outcrops, the intention to prevent rockfalls.

At times, one was surprised by the sight of small shrines.upon those older ones.

A small green clearing was an interesting place for a small group of portable loos.

A quick refuel was undertaken at Kreusch (km 178.4) where an hotel, restaurant and caravan park were integrated with the integrated alongside the fuel dock. A short time later, the night’s mooring was found available at km 178.29, Schwiech.