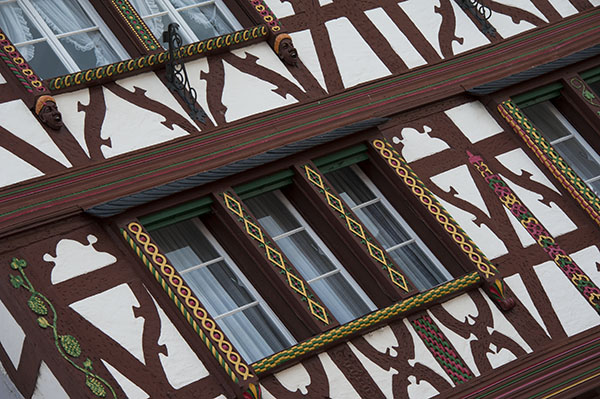 After Trier, we found that with each tributary passed, the river flow increased a little more: in comparison with the Rhone and Saone the current was nothing about which to be concerned.

A bit of excitement this particular day, as we approached Bridge Thὅrnich. A group of young men were enjoying the adrenalin rush of leaping from the bridge into the water below, from whence they returned to the river bank and repeated the manoeuvre. Bob blasted the horn. Did they halt? Absolutely not! With a lazy wave of the hand, on they continued and Gratis proceeded forth with much caution. One would hope they kept a watch out for the working barges.

Today the hillside slopes increased as the Mosel continued its gradual erosion of the valley through which it wended. Some of the wineries created their names using the vines.

Passing Neumagen Dhron Bob and I caught sight of a replica Roman wine ship. So far back in time, the Mosel Valley was known for its wine.

Motoring through the deepest of valleys, the peaks were of such height the VHF radio signals were blocked – they only work through line of sight.

Passing Weinork – Leiser –we were presented with exquisite architecture along the river front.

Occasionally we passed delightful decorations upon the garden fences.

Just prior to lunch, Bob and I arrived in Bernkastel – Kues. Wow!!!!! The camera can’t tell the true story of the architecture of these towns. Once two towns facing one another across the waters, it was not until the late 1800s that a bridge was constructed, thereby linking the two. Some years later, in 1905, Bernkastel and Kues, became one.

Habitation of the area dated back to 370AD. Bernkastel literally means ‘bear castle’ Did bears once roam this region?

Upon sauntering into the market square of Bernkastel, we were mind blown by the sight of multiple colourful half – timbered houses. The oldest which dated back to 1416, brought to mind the nursery rhyme about ‘The Crooked Man’.

One could have spent days discovering new items. No matter where you looked, there was intricate detail!

This particular doorway attracted interest, for it showed the flood levels the Mosel had attained over the centuries.

Some of the fountains were delightful. You really had to study them and undertake a full cirmnavigation in order to truly appreciate the piece. Some appeared so real, it was possible to imagine the character moving within the next second. From bears

was this one relating to Eve

The detail found in this last was mind boggling.

Into the tiny church:

And something totally different:

A trip in the local tourist train took us to Kues where a picturesque view of the valley was provided.

Kues itself, holds a special place in history.

It was here that the little – known cardinal, Nicholas Von Kues, was born in 1401. With an enquiring mind like Leonardo da Vinci, this man was gifted in numerous: reform, administration, theology, philosophy, mathematics, astronomy and more. Today, he is considered a font of knowledge: in other words, a genius. In science, his works influenced the likes of Galileo, Copernicus and Kepler. It was after Nickolas that the Kues hospital was named.