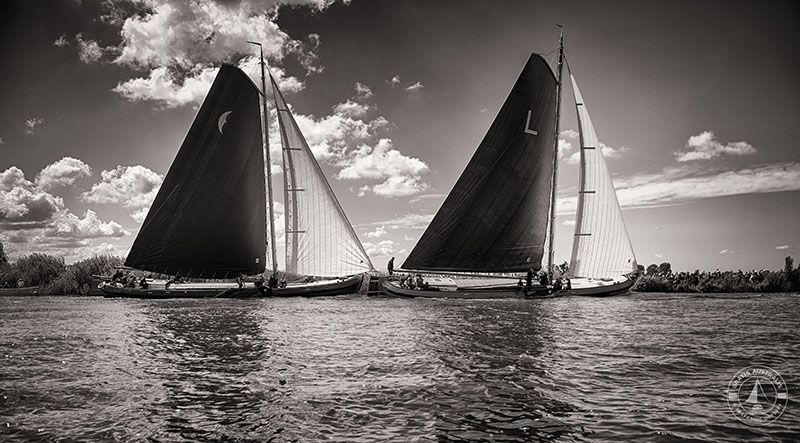 Today was the day of days: our opportunity to experience the vibe and excitement of a Skûtsjesilen (pronounced ‘skootshuh’ – oo as in book) race!

The Skûtsje is a style of Frisian ship that was once used by the Frisian farmers for ferrying cargo along the narrow, shallow waterways. Ranging from 12 – 20 metres in length, 3 – 4 metres wide, and shaped with long, flat bottoms,

these vessels that use leeboards rather than keels or dagger boards, were first constructed during the 1700s.

To our surprise, they remained in service until the early 1930s, when motor boats at last replaced them.

The first races commenced during the early 1900’s when village hotel/bar owners offered prizes for the winner. During the early years, the captain and his family were full time liveaboards. In order to gain full speed, the cabin interior and family were placed on shore just prior to the race.

Some time after the Second World War, interest in these vessels revived and, as Bob and I discovered today, has only continued to thrive.

The races of today form part of an annual championship between these historic ships, with the captains and their crews competing for line honours. The race Bob and I watched today followed the original route of the pre – motor era.

To start the afternoon was the custom of taking the craft into the main canal that ran alongside the township.

Here, the crews ensured all was in readiness. See that long pole the lad is holding? We were under the impression it was for fending off.

Manoeuvred into position, a rope line was attached to the boat in front: in all, there were two groups of seven, each with a small tug pulling them out onto the lake.

Leading off, was the beautifully maintained replica under sail.

It was possible to observe how, with the use of  blocks and rope, the lee – boards were placed into position with each tack.

Second in line were the band: all had a wow of a time!

Ships released, it was time to set sail and head to the starting point.

Setting the poles for downwind.

That took some muscle.

And again, and again…

It was for testing depth.

He wouldn’t want to lose his grip, would he?

What a sight it was!

Now for the race. Taking place over four days, each in a different location, Bob and I only watched the start. That was a thrill in itself!

Some of the spectators

It took a few to set the massive sails after each manoeuvre.

Under the foresail a few of the crew rolled

Into the narrow channel, the spotter keeping out a keen eye.

Whilst in the narrow section of waterway, one captain even made a cheeky manoeuvre in order to gain a few spaces. Because of his position in relation to the wind, he had right of way, so the other boats had to let him in.

As close to the bank as possible tacked he.

Across went the rudder,

Back across the channel,

and into their new position, in readiness for a tack to take them around the corner.

Bob and I were returning to Gratis as the leaders rounded the first marker.

Race watching completed, to Sneek (Snake) we motored. Upon arrival, Bob and I discovered the marinas full to overflowing, and the town moorings had boats rafted up to three deep. It was Sneek Week, we learnt – more about that later.

Eventually heading out,  the way from whence we had camoe, it was with relief that we discovered a small space next to a boat repair workshop. With the township full of the youngsters, we believe it turned out to be one of the quietest regions of the town: for us oldies, it was perfect for a good night’s rest.