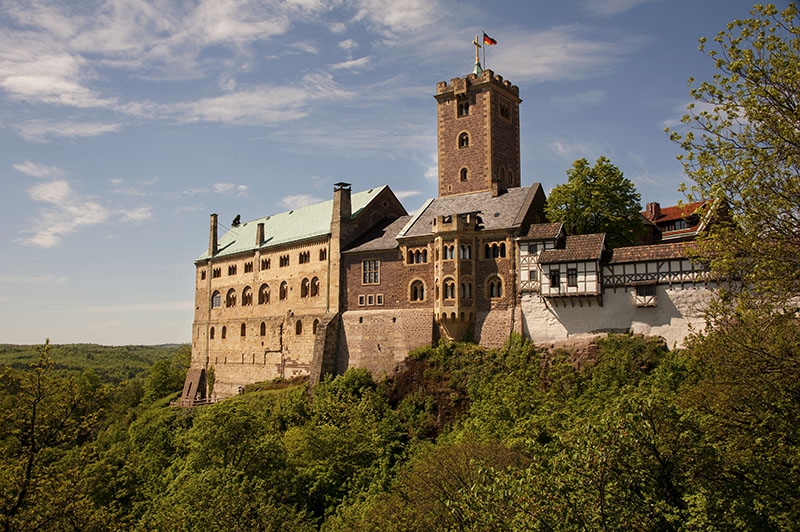 Today Bob and I continued our journey through northern Thuringia.

First stop, though, was the church. Mirror image, the outside was a little different to the norm.

A quick snapshot of some slate covered buildings.

Sighting three spires, a snap decision to make a stop in Bad Langensalza was made. This was a town of crooked rooves.

First mentioned as Salzaha records of 932, its name was altered to that in Langensalza in the 1500s. Sulphur pools were discovered in 1811 and, considered a curative of ills, opened to the public in the following year. The word ‘Bad’ (bath) was added to the town’s name in 1956.

Market day, the small own was abuzz with conversations. On looking up, the visitor espied inhabitants resting on their window ledges watching the hustle and below. Once a part of communist East Germany, renovations of dilapidated buildings are still in progress.

Some early inhabitants must have been dwarves.

A hop and a jump from the town was our planned stop for the morning: Unesco heritage Hainich National Park.

The visitor to the region gains a sense of the landscape our forebears experienced as they made their way west.

Unlike Australia, where roads enable the traveller to experience the national parks by car, only one thoroughfare allowed access through the forest.

To fully experience the atmosphere of this rare ecosystem, one had need to take to the walking paths. Sadly, Bob’s knees not being up to this type of trek, our planned sojourn of a couple of relaxed hours in this unique part of the world was short lived.

Continuing onward, all the while enjoying the landscape, we arrived in Eisenach where we found the UNESCO heritage listed eleventh century built Wartburg Castle (image above).

Residing some 400 metres above the surrounding countryside, what a treasure the Germans have here, and so much history!

To enter, one was required to cross the portcullis and enter through the massive wooden gate

into the forecourt. Continuing on, we arrived in a second courtyard, and it was here that the Romanesque styled palace itself sat.

The fountain was a little different

and some visitors partook in a thirst quenching drink.

So disappointing, we were unable to take images of the inner sanctum.

Goethe and Wagner are just two of the famous who enjoyed trekking the paths through the forest woodlands and gaining inspiration.

Luther spent time here under his assumed name of Junker Jorg in 1521 and wrote the first translation of the new Testament from the Bible from Greek to German. Goosebumps shot through me when I came to stand in front of the case in which Luther’s first translation of the new testament was housed. Further on, walking past the tiny study where he sat and carried out his transcribing left one feeling some awe at being in the spot where history was made. This was living history!!!!

During the nineteenth century, a large group of students and professors from all over Germany gathered in the castle and pushed for a national state that had its own constitution. Whether a coincidence,or deliberate decision, the colours of the flag these people created are those that make up the German flag today.

In all, Bob and I spent one and a half hours wandering through the palace, all the while listening to our headsets, reading information boards and studying the displays. For those touring the region, this a definite must to visit!

The town of Eisenach itself is a treasure trove of historical tidbits. For example, Bach Haus, where the visitor has a chance of hearing the 1760 Silbermann Spinet and organ from 1745; and Lutherhaus, which Luther spent some years lodging with the Cotta family, whilst he attended school is now a museum (albeit rebuilt in 2015).

The remains of the oldest stone age man found in Thuringia have been dated to 350,000 – 300,000BC and Homo Erectus remains were discovered.

Thuringia was known as Thoringi in 380AD