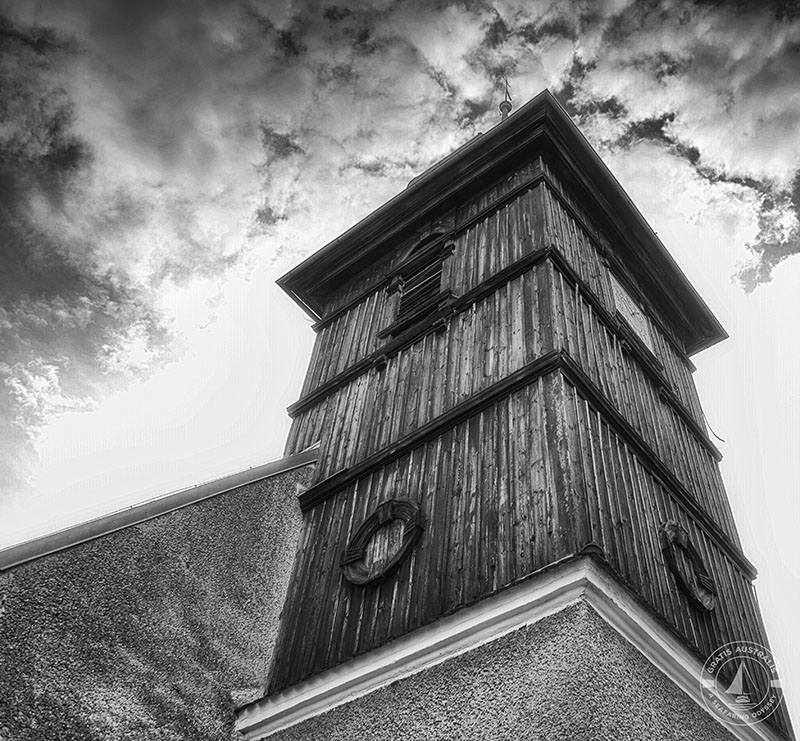 Yes, I had the wrong Heinersdorf. As we travelled and I took real note of most distances travelled by the family, I developed a niggling feeling that, in the scheme of things, Chwalecice wasn’t the township in which Johanna – Gottlieb’s wife -had been born. A bit more research and I hit the nail on the head! Spalona, which was roughly half way between Prochowice and Legnica, had also been called Heinersdorf. Here we stumbled across the tiniest of old churches, in which was situated pulpit of wood that had been constructed in 1902.

The upper section of the tower had been built of wood, and green moss was now making its mark upon it..

A memorial stone scribed in German and Polish and cobble stones.

In a first, the church was open, with local ladies beautifying the inner sanctum with flowers. What a gem this building was, with no sign that we could see of the war having left it desecrated.

A hint of the eastern influence.

the church was placed within its centre.

A wooden tower, common in this region.

Here we discovered a hint of the town’s German history in an inscription etched into one of the walls.

This was the first town visited in which we found true evidence of its old Lutheran heritage. On plaques placed within the burnt out ruins of the church and the nearby seminary walls ‘Parchwitz’ was etched.

The church, whilst quite plain

had an impressive bell tower.

Aged headstones were placed along the protected church walls.

A kindly gentleman approached us whilst we were investigating the church and excitedly pointed us in a direction that led along a winding track through a line of trees that lined the banks of a stream.

Emerging into the open, ahead of us stood two pillars, the remains of what had once been an impressive gate entrance,

and behind them a gated arch that led into a massive decaying structure.

As the four of us ambled along a narrow pathway that ran along the top of the moat, it was possible to see renovation work was underway.

and surrounded by a moat – a river that would flood in times of heavy snow melt, the seminary would have been impressive in its day .

We came upon the township’s cemetery on its outskirts. The distance seemed way too great to have been the original, but we did come across old gravestones covered in German text leaning askew against the outer wall, whilst others with surnames we recognised from the Yorke Peninsula, South Australia, were amongst the burial sites. Maybe there were two churches. We will never know!!!!

On a positive note, the seminary appeared to be undergoing renovations.

Reactions by the locals were most interesting when we mentioned the word Lutheran. Like they shut down: not sure if from hatred (when delving into the history of Poland, the researcher discovers it’s peoples have been under the rule of numerous enavaders over the centuries), embarrassment, or fear of displaced people returning to reclaim their land???? Maybe it’s more to do with the latter two.

‘There is a legend about the three forefathers of Slavonic nations. There were three brothers Lech, Czech and Rus who wandered with their kin tribes away from the original Slavonic settlements in the present area of Ukraine (between the Vistula and the Dnepr rivers). Rus moved to the east while the other two wandered with their people westwards. Lech stayed in the lowlands and established his town near a white eagle’s nest (the white eagle is the country’s coat of arms). Czech went more to the south.

Slavonic tribes came to Poland in the 6th century AD. The first town of the Polan tribe was Gniezno, along with Poznan, the oldest capital of Poland. It was there, where the first royal dynasty resided, the Piasts, who drew their pedigree from the mythical Piast, a wheelwright who founded a dynasty that ruled until 1370. The Polan tribe dwelled in the western areas of today’s Poland, in Wielkopolska, whereas Krakow was the central settlement of the Wislan tribe.’

History of Polish borders from: http://www.staypoland.com/history-map.htm