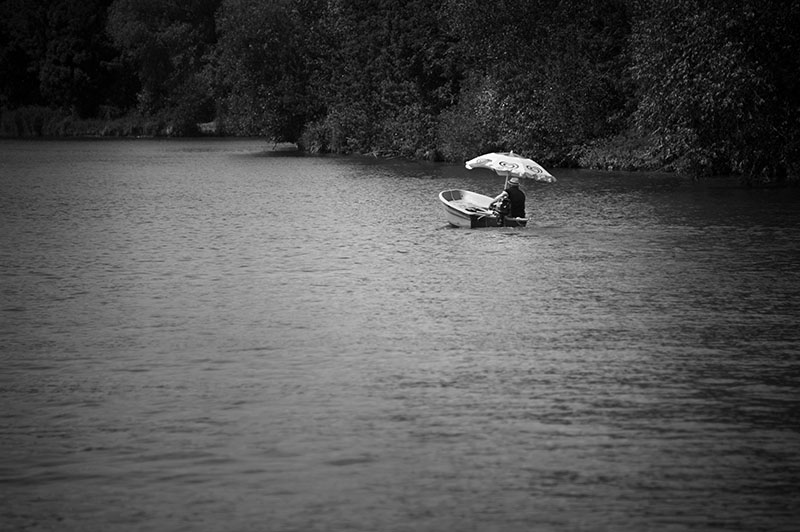 This year’s adage is, ‘Take it easy!’

With that in mind, it was a slow relaxed start to the first day of our 2017 cruising year. On the advice of our friend, Ollie, heading north for 7km brought us to the Havel Kanal junction, where Bob turned Gratis left.

How right our German friend was. Initially, mad keen fisher folk out attempting to catch a bite – having seen one beauty that measured a good 70cm the other day, I know there is an occasional giant lurking around – were to be avoided, but upon the Havel it was well into the morning before other cruisers passed us by.

One keen farmer drove his tractor to the canal’s bank.

Today’s route was for the nature lover. Bird song floating upon the breeze was a constant companion, as Gratis motored on the watery road that took her through woodlands and past small farming properties.

At Schleuse Schonwald, on learning we came from Australia, the lock keeper joined us for an enjoyable tête-à-tête whilst the waters lowered.

Passing beneath one of the bridges, Bob and I stared in amazement at a creche of half – grown Canadian geese paddling along the water’s edge.

Like a carpet of snow, seeds blowing upon the air, came to rest upon the canal’s surface.

This little fella ran along the bridge supports,

and we even came across a skinny dipper.

At times, the sickly sweet aroma of honey suckle wafted upon the air, tickling the nostrils and eliciting an almighty ‘kerrrrrrrrrrchoo!!!!’

The blooms of waterlilies were in the process of adorning their pads that floated upon the water’s surface,

whilst upon the land, it was the vibrant red of the poppy that attracted the eye.

14:00, Gratis arrived at the intersection that last year saw us heading south into the Gottin – See toward Potsdam. Travelling down from the north, that entrance was directly ahead of us. Today, a right turn faced us westward toward the Mittelland Kanal once more.

A wait for the ferry to cross over;

People out with their rubber floaties:

A few short kilometres later, Bob pointed Gratis’ nose into a marked channel that led us directly to the edge of the tiny Altstadt.of Ketzin. Pulling alongside the outer pontoon at Seesportsclub Ketzin, we were made most welcome: in fact, being Australian was a bit of a novelty for them – we were the first!

A walk through the township, and we discovered some interesting novelties.

or two, some interesting metal work,

This youngster is already attempting to fly,

whilst this Ugly Duckling appears only hours old.

Day cruisers in for the night, the area again became a silent backwater: except for the fish jumping, swallows twittering and frogs calling.