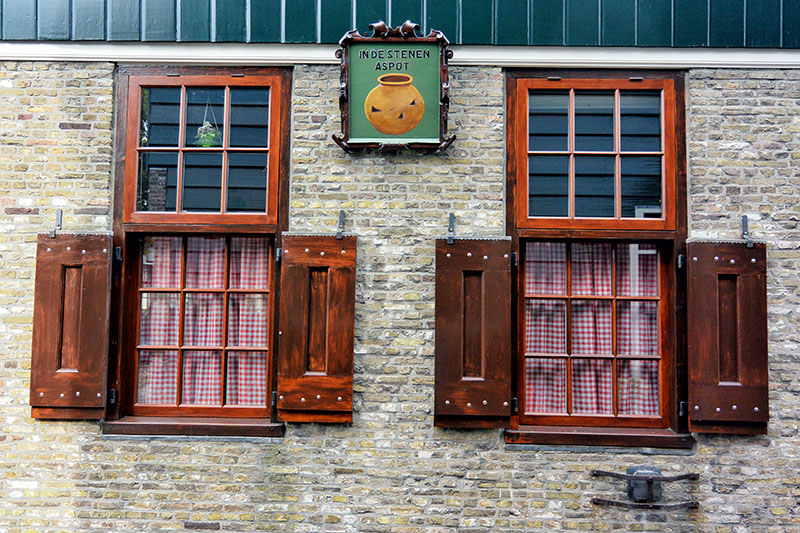 First thing this morning, Little G2 was lowered, and to the gorgeous village of De Rijp headed we.

De Rijp, we discovered, is a township in which many building are constructed of wood

and where the lone canal runs through the centre of town.

There were several museums, quite a surprise in a township so small. It was the little touches that we loved.

Atop many buildings were carved figures that denoted the occupation of the inhabitant/s.

During the 1600s, De the citizens of De Rijp built a highly successful herring fishing industry and this soar the economic boom for the townspeople. The influx of monies saw the town become independent, and its own town hall constructed.

At this time in history, the township was connected to the Zuider Zee by two waterways, so it wasn’t much of a jump for the fishermen to turn their hands to whaling. By 1680, their fleet numbered 19 boats. With the waters around De Rijp being shallow, the goods were transferred to smaller vessels and carted to shore in these. Sadly for the townspeople – but thankfully for the whales – with the draining of two tracts of water in 1612, the industry for the township came to a sudden close, thereby reducing its income stream.

With major outbreaks of fire over the centuries, many building found within the township of today are not the originals.

Two of the township’s citizens came to prominent fame in times past.

A carpenter, architect, designer and engineer, it was he who planned and instigated the draining of the Beemster in 1612, thereby creating a number of new terps and adding a further 20,000 hectares of land to the landscape. It was he who designed the De Rijp town hall and Weigh house.

The second was a Jan Boon, born in 1758. The last sea going merchant of the town, he was the last person to be buried within a Dutch church. On his passing in 1847, with no heirs to take over his empire. his wealth was willed to the township. Invested wisely, to this day, it is the monies from the foundation that was formed that fund the local activities.

Our town wanderings at an end, to Gratis Bob and I went. Dinghy returned to the davits, a short 16km took us to Uitgeest situated at the south – western end of the Alkmaarder Meer.

A pleasurable, meandering 4km bike ride through pasturelands led us into Castricum, a town with a Roman past. Mostly a very modern town of today, there was an occasional glimpse into what had been.

At last finding the museum, with only 20 minutes remaining until closing, the decision was made to return on the morn by train.