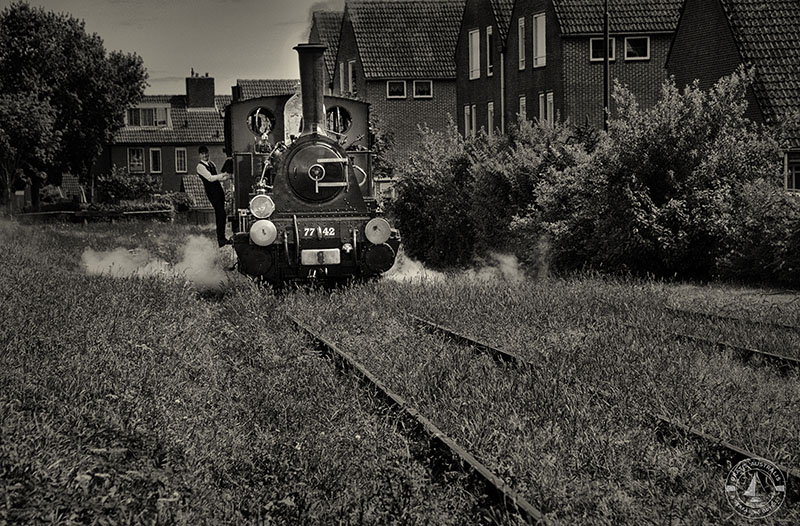 Sunlight skies, the sun emitting a rarely felt warmth, it was perfect for a motor across the Ijsselmeer, thereby leaving Friesland behind us.

Once the Zuiderzee (to we English speakers, the South Sea), this man – made lake was created upon the completion of the 32km long Afsluitdijk that protects the region from the forces of the Wadden Sea. Fed by numerous rivers – including the Ijssel, Vecht, Amstel and Rhine, this is the largest lake in the Netherlands. As the Wadden Sea attains low tide, its waters become lower than those in the lake, and it is at that time that sluices in the towns of Kornwerderzand and Den Oever are opened, thereby releasing unwanted waters that have built up as a result of the influx from the rivers.

Out of the lock,

and a short 20 kilometres of motoring brought us to the small town of Medemblik, situated in the province of North Holland.

On entering the township, to our left was the town’s castle, whilst to the right there was an air of celebration as people aligned the streets and music rang over the air: It was ‘De Westfriese Waterweken’.

Having arrived early enough, it was possible to find a town mooring in a prime position for watching the dragon boat races taking place.

A walk around this exquisite town brought to light beautifully maintained buildings.

had a link back to the deposed Catholic Stuart line of British monarchs.

Inside was the gravestone (his grave had been moved outside when part of the church was demolished for safety reasons) of the Jacobite general, Lord George Murray, who fought for Bonnie Prince Charlie – grandson of James II – in numerous attempts to retake the British throne.

For those who are interested, here are some links:

At the railway station, we came across a 1926 steam train and carriages. During the summer months, it does a daily run between Medemblik and Hoorn.

Within one of the backwaters, some Grebes had found the perfect spot for nesting.