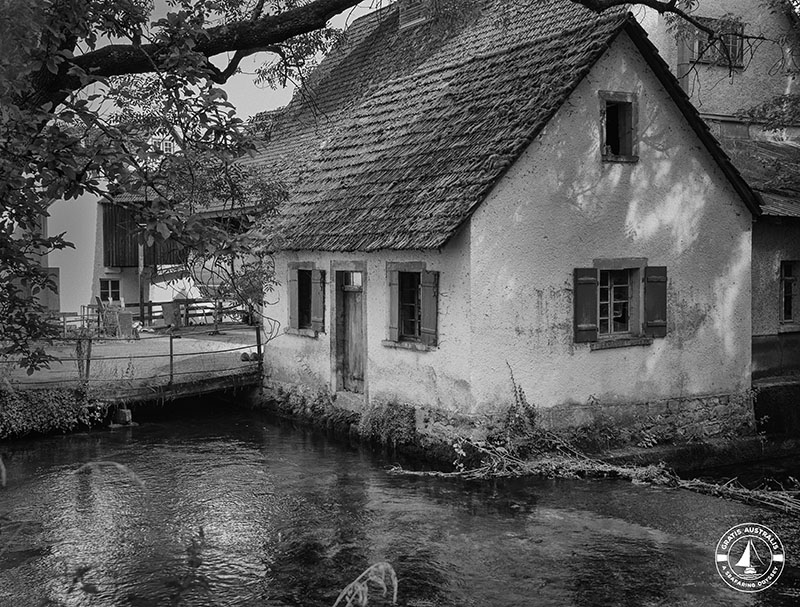 Today saw us enter Germany and the Schwarzwald, land of the cuckoo clock, black forest cake and pom – pom hats.

With its neat as a pin towns, white washed houses, mixed with wooden balconies, beams and flowers, Germany was so incredibly different to France.

The commencement of our journey took us through cherry and strawberry country – oh for it to have been a weekday when the stalls were open!

Walking and cycling paths crisscrossed the country – side by the dozens and ancient stone crosses worn by the winds and rains of time denoted the ancient travellers’ byways. Nearby, wooden bus stops signalled modern transportation by bus.

Fast running streams tripped and raced along the roadside, whilst elegant pines reached skyward and the greenest of ferns decorated valley floors.

Logging and milk trucks, along with farmers perched upon a variety of tractors travelled the byways, whilst Kniebis, still and silent skeletons, stood like sentinels upon the mountain slopes: until the winter snows brought with them the hordes of ski mad athletes, that is.

Passing through a tiny village, we just had to take a few shots of this exquisite artwork.

What a hidden treasure!

as was this one.

Come a little closer and you get to see some of the inner make – up.

This beauty has so much history

Then step a little closer…

We loved the corners.

So much art work to be created..

Constructed in 1085, the town’s monastery commenced its life at the instigation of two Catholic counts. With the coming of the Reformation, the rule of the Catholics was terminated in 1535 as the Protestant movement gained momentum and, upon its arrival in the mountain town, saw the monks residing within ejected. Today, the premises is a protestant seminary with a boarding school attached. As much as Bob and I would have enjoyed exploring the site, entrance fees soon add up and we chose to pass.

We liked the way in which older pieces were adhered to the front on an entryway.

Literally meaning ‘blue top’, Blautopf at 42 metres in depth, is fed by fresh subterranean waters and is the spring from whence commences the Blau River. Like ‘Blue Eye’ in Albania, its name is taken from the surreal variations of blue that are resultant of water pressure, weather and the limestone particles within.

Residing on the banks of this exquisitely beautiful pool, was a water powered drop hammer mill used for forging iron in the early 1800s.

A touch of the whimsical if one chose to look up.

Now to move on to the most interesting part of the visit, and our main reason for coming.

Situated in the Danube Valley 520m above sea level, Blaubeuren is a centre in which early man once resided. In Blaubeuren and its surrounds, caves are a hive of activity where archaeologists continue their search into the pre – history Palaeolithic life of the Neanderthal and early homo sapiens some 40,0000+ years in the far distant past.

With its 3D displays, movies and more, Urgeschichtliches Museum (Kirchplatz Blaubeuren) was well worth the visit.

Display of skulls of our various ancestors.

Our bigger brain played a major role in the advancements we made.

Map of the ice age world.

Display of paleontologists at work.

A movie in which a group of people re – enacted the lifestyle of our early peoples.

A sharpened bone used to cut the meat.

Replica of the Neanderthal and his clothing.

The smallest of utensils.

Fossilised bones: that was one massive jawline

Musical intruments made from bone/ivory.

Mother figures by the dozens.

There was so much information to take in that the visitor could have returned fo a month of Sundays and still not have gleaned all they wished.

And there was more…..

A short journey took us back to where it all started.

Hohle Fels, the massive cave from which many of the finds came: 3E entrance fee, all set up for the visitor to self – explore. Ice cold, water constantly dripped, and the unprepared entwined their arms around the body in an attempt to maintain body heat, whilst following the pathway which had been lit to highlight where archaeological finds had been discovered and excavations continued. What a perfect winter home this cave system offered those early peoples as snowstorms raged without.

The small tags show the layers. The lowest is where tha Neaderthal archeology was discovered.

One was required to be a hobbit.

Nearby, was Blauhöhle, the largest cave system in the alps of southern Germany. The structure resulted from a time when the Danube’s path wended through the Blau Valley. At its maximum depth, the cave lies 42m under water.

Since its discovery in 1985, Speliologists have continued exploring and mapping this amazing labyrinth of tunnels and chambers. Because of the dangers involved, it’s sadly not possible for the everyday traveller to enjoy.

Images of the Caves

Image of the full system

That night, as the evening church bells gently chimed, we discovered Summer comes to an end earlier here, with the cooler nights having an unexpected chill.

Sapiens: A Brief History of Humankind by Yuval Noah Harari

Becoming Human: Our Past, Present and Future by Scientific American Editors

Humans: from the beginning: From the first apes to the first cities by Christopher Seddon