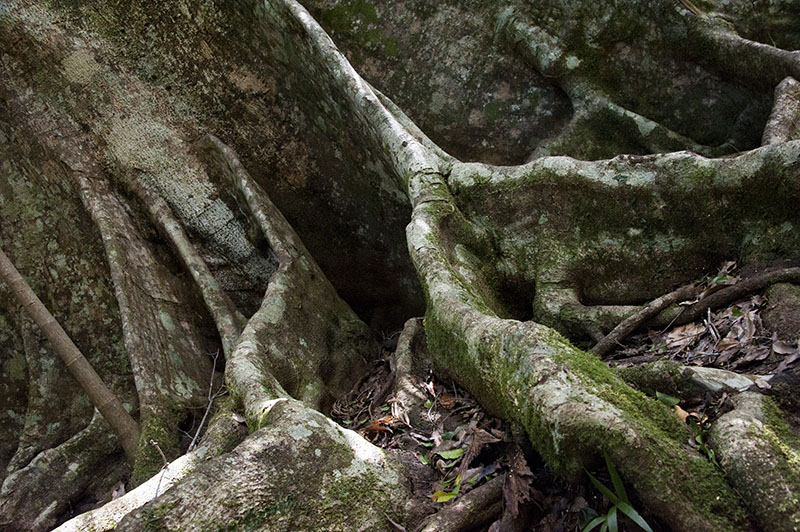 A surprise as we motored up the mountain this morning. A group of paragliders were enjoying a ride upon the thermals.

First stop, Cedar Creek Falls and Lookout. Dry except for a series of rock pools, the sun beat down upon the unwary with a burning fury. Brush turkeys scratched, minor birds called, and magpies warbled.

A beautiful spot for a swim.

With a winding narrow path leading Bob and I into a wet luscious green forest, MacDonald Rainforest Circuit was of significant contrast to the previous walk.

Deathly silence, except for the humming of bees high above and the occasional squawk of a raucous black cockatoo greeted us as we made a way into the cool shadows through which the sun’s rays struggled to stray. To halt signalled an invitation to the ravenous blood sucking mosquitoes lurking in the shadows

Appearing as though tossed to land in a higgledy – piggledy fashion from some long gone giant, moss enshrouded boulders lay littered upon the slopes, whilst Piccabeen Palm trees, vines and ferns decorated the valley floor.

Hundreds of years old red cedars and strangled trees lay where they fell, in the process of the long decay that returns them to the earth from whence they grew.

A rustle in the undergrowth, and a rapid movement drew our eyes. A sleek shining black gecko like lizard, momentarily startled now rested still as a log.

The last stop of the day, Palm Grove Circuit, was less than a kilometre away. Here, a narrow moist pathway led us down toward the valley.

Most notable here was the space between trees and lack of both red gums, eucalypts and undergrowth. Whilst admiring the white trunk of a lone leaning eucalypt giant, we learnt from a passing local that the hillside here had once been covered in them. The commencement of the 20th Century saw logging for the construction of the Gold Coast undertaken, and very few of these beauties survived the onslaught. With their removal, the way was made for the inundation of the young palms that have taken their place.

That aside, giant strangler figs, hundreds of years old and other giants of similar height stood tall, or lay where they fell when the ground beneath had given way.

Highlight here was the sighting of two Red – necked Pademelons as they darted through the trees.