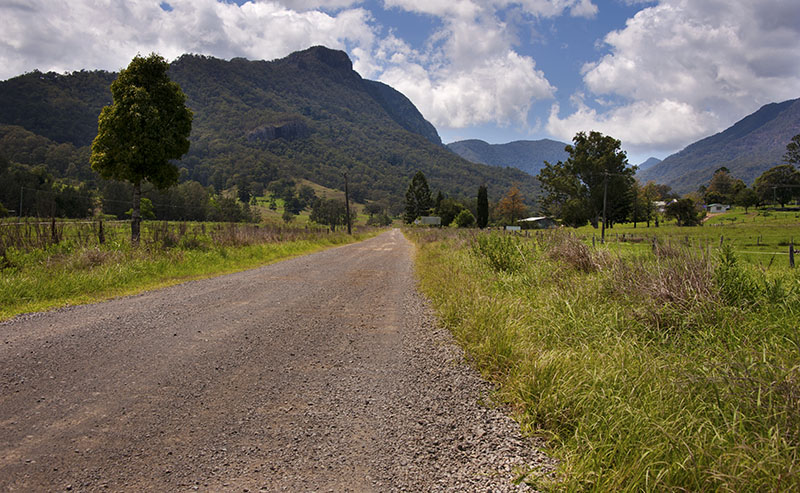 Having driven to Beaudesert, a turn into Kerry Road had us heading south toward the imposing Razorback Mountain, on the south western edge of Lamington National Park.

The region of The Lost World Valley, settled in the late 1800’s, bushland had been cleared to make way for the open green pastureland on which dairy cows and cattle are fattened today.

The further in we drove, the more natural became the scenery: ancient trees reaching skyward, Xanthorrhoea Glauca, Hoop Pine and more, had one seeing the land of which poets such as Lawson and AB Paterson wrote.

The sound bitumen road soon gave way to first a surface covered in bumps and potholes, then a typical narrow bush road of dirt.

Through a gate or two, past hidden cottages, campgrounds and farms until our path came to a sudden end as a fence, beyond which lay a lush valley of green, brought us to a sudden halt and Lost World Valley, Lamington National Park.

A track was visible past the gate, but it involved fording the Albert River, beyond which walks were highlighted on the map. We chose to give that a miss, and instead sat down to enjoy a lunch of homemade pizza and strawberries upon the banks of the crystal – clear river that bubbled and burbled over smooth, worn river stones.

Gentle at the moment, this giant upon the bank provided a visual image of the forces at work during times of flooding.

Retracing our steps a few kilometres, we took at left turn at Darlington Connection Road a road that cut across to intersect with Christmas Creek Road. Upon arrival at the junction, a left turn took us onto a corrugated road that rapidly narrowed into a one vehicle track.

Repeatedly fording Christmas Creek, the road led us first up, then down as we circled round the mountain and arrived at the end of the road.

These tiny water beetles showed their strength as they repeatedly swam against the current of Christmas Creek.

This, too, was an entrance to Lamington for the walker who is experienced, fit and eager enough to undertake the Stinson Track.

Expecting a well – marked trail, Bob and I commenced walking, the intention to enjoy a leisurely 30 – minute sojourn,

but had only made it a few hundred yards in, when a massive fallen tree proved to be the pathway across Christmas Creek.

Deeply cracked rocks, just waiting for the next major flooding for their thundering crash to the ground.

Already difficult to follow, we called it a day.

Throughout the drive, blackened Xanthorrhoea dotted the countryside. After seeing this plot, we realised they had been deliberately burnt, for that is a requirement if they are to survive and reproduce.

A bit of googling later in the day, and we discovered there is history to this particular hike, with the route retracing the steps of a rescue party for the survivors of a crash known as the ‘Stinson Plane Crash’. Not maintained by ‘Parks and Wildlife’, compass and topographical map are musts for this 8km walk that will take a minimum of 8 hours, as visibility is poor, and as BOb and I dicoc=discovered, the track overgrown, indistinct and rough.

Lost World Valley was beautiful, but for Bob and I, Christmas Creek was the pick!