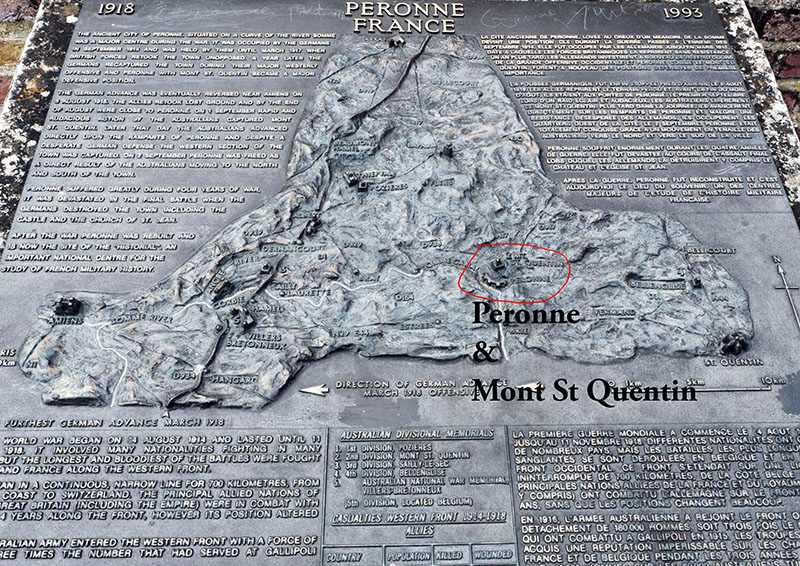 September 2nd this year will see a memorial day taking place in remembrance of the Australian troops that fought for, and liberated, Peronne during WWI. In fact, throughout the year numerous events have taken place around Australian culture.

The Battle of the Somme in WWI was such a significant part of the fight for freedom in European history that Bob and I felt it was imperative not to miss this museum, entry of which is via the magnificent Chateau de Peronne.

Information was so great, it would require a day or more of intense study.

and utensils were varied.

Many maps, graphs and so forth detailing various topics.

Doctors, nurses and the red cross at war.

Call for assistance from the civilians.

Drawings by an artist.

There was even a movie made from old footage.

Despite having studied the two great wars in European history, it is incredible how much one didn’t learn.

It always amazes one that there are peoples who still haven’t learned.

The year 1918 and the Germans were advancing rapidly across France.

By the last days of August, the troops had attained Mont St Quentin, the perfect lookout post across Peronne and the Somme Valley. This post was pivotal to their Somme line defensive.

Considered one of the most brilliant of the Allied generals, he realised the strategic importance of this region, and desired to relieve the Germans of their post, thereby attaining it for the Allies.

Now viewed as one of the greatest achievements of war time, the evening of the 31st August found the second Australian Division crossing the Somme River: the aim, to attack and hold Mont St Quentin.

Being a battle that would see the attackers working their way uphill across open ground, the Germans were unsuspecting, as only a ‘madman’ would attempt this type of attack. Rifle grenades and trench mortars were of great benefit as they took out the outposts, whilst battalions were strategically placed to create noise and distraction whilst the remainder took up position and gained ground.

By 12pm that night, by working in small groups, with the Germans confused and fleeing, the Australians attained the summit, then by mid – morning on the 1st September arrived in Peronne.

Over the following days, counter attacks took place, and the mount changed hands, but by the 3rd of September the Australians were victorious, and by the 5th had managed to advance a further 3.2km eastward.

World War One was one of the most ferocious in history:

Numbers Lost in 1918 by the Australian Forces

WWI was the era in which many technological firsts took place: