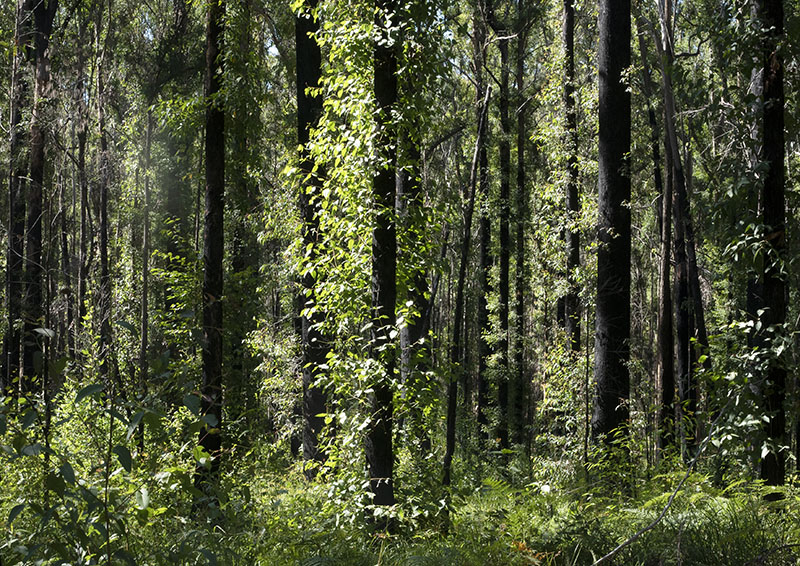 A two hour trip, we passed through country that had been decimated by last summer’s bushfires, but more on that later.

Arriving in beautiful Port Macquarie in time for lunch, a sushi meal was purchased, then Bob and I dined upon the lake shore. A meander around a section of the lake stretched the muscles, then back to the car we returned.

On the way up there, a sign post directing the intrepid traveller toward a boardwalk at Cattai Wetlands (don’t confuse it with Cattai National Park) caught our attention. That was our afternoon destination. Roughly 60km south of Port Macquarie, on arrival, a left turn led us eastwards. You can imagine our disappointment when a sign informing the traveller that the park was closed caught our attention.

Sadly, the bushfires had roared through the this area, and infrastructure is still undergoing repairs. One must check the national parks website!

So what did Bob and I do? Why, looked at the road map to see if there was an alternative route to the highway. Yep, there was!

With our gps to guide us, onto a dirt road Rolling G turned and we were off through a forest of regenerating native bushland. There was even time for a quick pause.

The Australian bush really is an incredible piece of nature. In most areas, whilst driving on the highway one really had to know what they were looking for, to realise fire had recently roared through.

Eventually returning to the A1, a further 36km south brought us to Wallabi Point. Fires had been through here, too, but the park area was open.

With an area for picnics, and one for camping, Wallabi Point is beautiful.

The fires here must have been fierce. In some sections, bush was yet to regenerate: a stark reminder for us all!

By now late afternoon was upon us, so back to the A1 we returned.

After several weeks, the installation of the traveller was completed. That was a cause for celebration!

Having been prepared, all items were organised ready to go.

The main sheet jammers were screwed into place.

and small, were put in place.

Special adhesive placed on the screws,

it was time for the messy work.

If you happened to touch the gunk, the cry went out for the white spirits. Well worth it though, for this is the nitty gritty work that helps to prevent leaks!

After a long slow process, the track was painstakingly lowered into place.

Now it’s a matter of waiting for the glues to dry, the the blocks and mainsheet can be installed.

For myself, the varnishing continues…..

The door was parched,

The web page information is ready for sending and discussing with OMG Agencies. Now I am working on additional information for parents, teachers and more…..

The good old paper trail still works best for me!

Only one large Sunbonnet remains to be cut and tacked together. Then it is time for the sewing!

A few weeks ago Bob came home with an unexpected surprise: a bread maker. The first loaf was a disaster as it overflowed the tin, so I halved the yeast for the second. It rose well.

Being only good for toasting, I need to try another tact on the third attempt.

The last week saw the trip to Calais go online. What a beautiful waterway the Calais Canal is!

Well worth the 30km there and back journey.