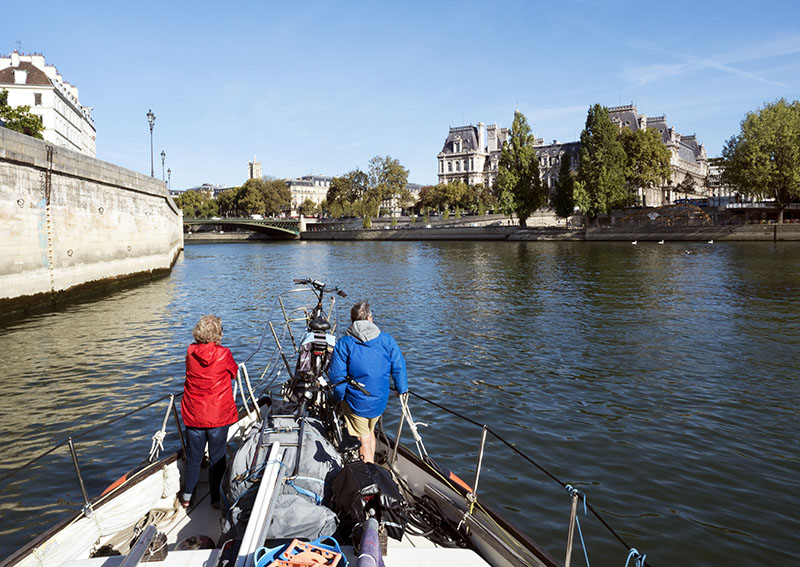 Our time in Paris had come to an end for this year, but it certainly wouldn’t be the last of our visits. To our delight, our friends, Anne and Cliff chose to journey to Vlissingen with us.

Intending to travel via the St Martin and St Denis canals for something different, this wasn’t to be. At the cost of 40 euro for a three month vignette – Paris canals operate separately the VNF – the feasibility of doing so rapidly disappeared, so we were back to retracing our steps to some degree.

The time for exiting the Arsenal marina was set by the people in the Capitainerie and exiting Lock 9 at ten minutes past the hour meant there was roughly a twenty five minute wait ahead.

On exiting the marina and facing to head downstream, the traveller was presented with the first two of those small land masses situated between Pont Sully and Pont au Change. Although there were three navigable arms, there was only one option available to the pleasure boater from this direction and that was the centre one. A section of water that enabled passage of traffic in both directions, there were set times for the water traveller (the hour to 20 past the hour for those travelling up stream and 25 to 10 minutes to the hour downstream).

Greeted by the impressive Notre dame once more,

past we went, to where we could see the light that would give us the go ahead on the bridge ahead.

There was so much to hold the attention

and bridges beyond belief.

The Eiffel tower in sunlight was impressive.

Bob’s intention to drop one of his passengers off so they could take a pic of Gratis and the tower didn’t come to fruition, as a day tripper barge pulled into the platform he had decided upon the day we visited this beauty on foot. Despite there being no signage, this was obviously a no – go zone, so he had to be happy with the next best thing…..

On we continued until arriving at Bras de Marly. Despite having loading zones for sand, gravel and cement in the first half, the latter section of this waterway was beautiful.

Ilse de la Chausse on our right was where the pre -impressionist, William Turner, and impressionist greats such as Claude Monet and Auguste Renoir gathered to paint the Seine.

Mooring on the western side of Pont de Bougival where there was room a plenty, we alighted and headed across the bridge into town to visit the tourism office and confirm the position of the ‘Machine de Marly’.

It is here that the visitor is a short distance from Marly Park, once the residence of Louise XIV and now a museum dedicated to his life and achievements.

It took a while, but at last a helpful citizen pointed us in the direction of the tourism Office.

The people in here so couldn’t do enough and we discovered there was a town mooring just back from where Gratis was moored. They drove us to the pontoon to open the power box and ensure the power was working.

Bob and I also learned the Bougival Lock was closed for maintenance and gate replacement, which explained the lack of response on our trip into Paris.