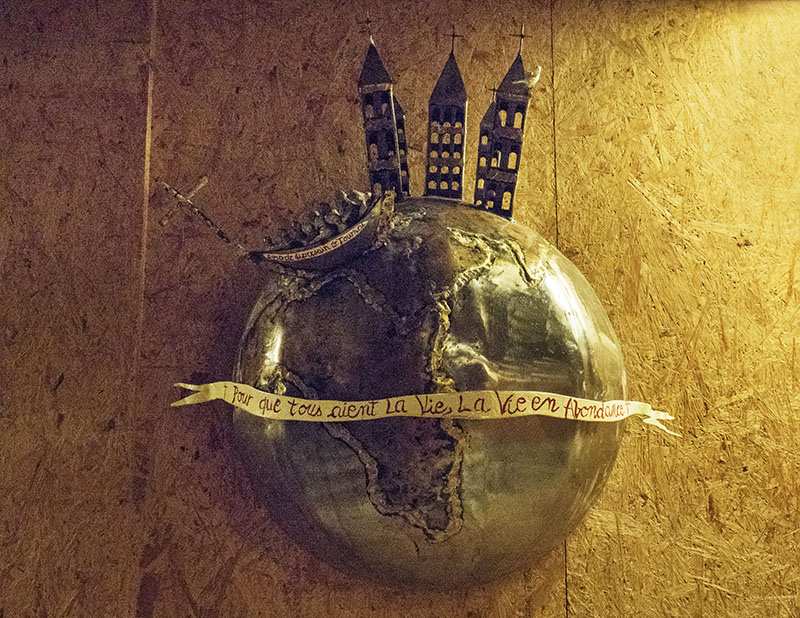 The bikes offloaded, Bob and I set off on a pleasurable ride to Tornai.

Situated on the border of north – western Wallonia, what a town this was!

With 2,000 years of history that dated back to 1BC as Tornacum under Roman rule,

in our minds the oldest city of Belgium easily rivalled Gent.

Our Lady’s Cathedral, at eight hundred years of age and having no less than five towers, was awe – inspiring in size. Not even my fish eye lens could fit in the full structure! This image we found on one of the posters will have to suffice. Inside, one had the opportunity to view small sections of earlier churches that included one from the Roman era.

Rising to a height of just over seventy metres, the Tornai belfry dates to the year 1188. Choosing not to climb the 256 stepped spiral staircase, Bob and I were happy to admire from the outside.

There was even a miniature replica!

Some of the homes dated to the twelfth century.

Interesting items were to be found wherever the eye looked, if one searched carefully.

In late September 1513 after Calais fell to Henry the Eighth in the Battle of the Spurs, he with the Spanish king moved on to capture Tornai. The Tower of Henry VIII was once part of a castle that consisted of 60 towers and eighteen gates. Today, all that remain of this once mighty structure are the Marvis Tower and Pont de Trous.

Because of the distance from Calais, Henry found it difficult ruling Tornai. Just over three years after its defeat, the township was returned to French rule for a ‘tiny’ sum

One of the numerous gates that once crossed the waters still remained.

Gabrielle Petit was a Belgian heroine during World War One. Assisting in rescuing soldiers and passsing on information, she was eventually captured by the Germans and accused of espionage. Despite experiencing unimaginable tortures, she proved to be a woman of immense strength, and remained true to her countrymen. Unable to break her, the Germans sentenced her to death, and on March 3rd, 1916 she faced the firing squad.

Oh yes, we mustn’t forget the marina. With power and water facilities provided, it would suit us for a few days.