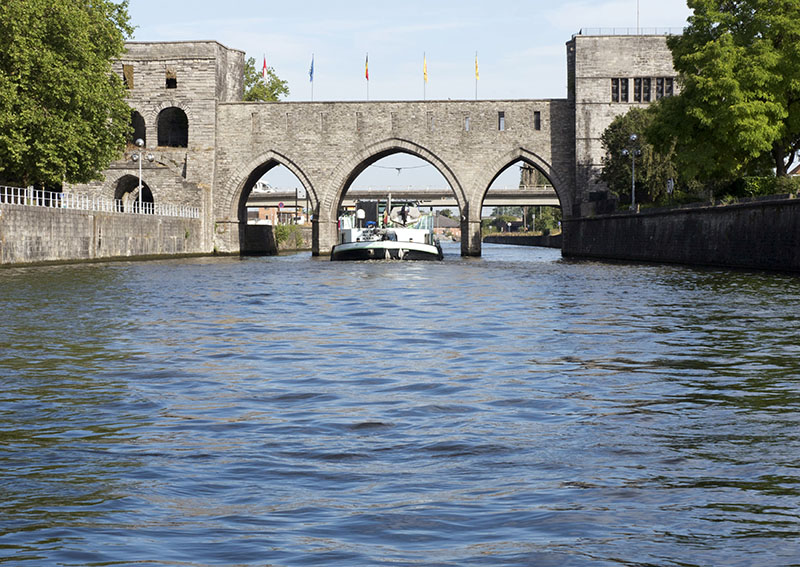 One the road again, the one – way passage through the narrow waters of Tornai would normally have made for a slow but relaxing motor, however, issues with our normally reliable Bog Bertha commenced (an Isuzu 4.5L marine diesel engine) and continued on a major scale.

With the light green it was time to depart.

Having moved off the mooring and arrived in the centre of the channel, the first sign of the headaches to come took place as Bob gunned the throttle.

With no warning our girl came to an immediate halt and the alarms blared. A practiced drill, since she had already done this on a few occasions over the season to date and Bob had yet to discover the cause, dropping all lines I raced below, turned the water inlet off – upon which water raced out of the hose – and on, then turned the key.

With a thrum, Bertha burst back to life and Gratis continued merrily on her way.

Approaching the first of the locks, Bob slowed to allow a commercial past, then proceeded increased power once more. That blasted engine died a second time. Below went I and repeated the process of restarting her. The question now was, ‘did we continue in, or pull immediately to the side?’ With the lock opening, the decision was made to head in and check things out on the other side.

A further moment as we pulled in to moor, but easily rectified, lock emptied, and out Gratis idled. Believing the water filter was the issue, Bob opened the engine room and went below to check out the system. As on the previous occasions earlier in the season, all was well. Totally mystified, up he came. Because of the escalating events, on arrival at the night’s mooring, further investigation of the full system was required.

Motoring merrily along a winding section of the picturesque canal, I was perusing our charts when out of the blue Bob asked me to open the stern lazarette hatch. On doing so, a plume of white smoke (in actuality steam) erupted as it rushed to escape its confining prison: ever alert, Bob had noted there was no water exiting the exhaust hose.

Below raced I, bringing Big Bertha to a grinding halt as the key turned. With her full 18 tonnes pushing her along, out on the helm, Bob steered our vessel shoreward. By now at the bow, with line in hand, as Gratis eased into the bank, I leaned over the side to grab a handful of branches of a nearby bush, and wound the line around them a few times prior to returning it on board to tie off on the cleat: the bonus of carrying out this process was that the still gliding Gratis was brought to a total halt.

By now, Bob was at the stern where he was utilising our long pole, in conjunction with an additional rope, to secure the hook in amongst the boulders situated in the shallows. Another line connected to the bush at midships, with luck and fingers crossed our girl would remain secured should a commercial vessel come past whilst she was disabled.

Whilst I checked the AIS for oncoming vessels, of which there proved to be two, and grabbed the radio, my love rapidly changed into his greasy work clothes then with toolkit in hand squeezed himself down into the confines of the lazarette.

Various items moved aside, the floor was made visible, the hatch removed, thereby making visible the thingamyjig – or what Bob called the water muffler (WM) – below. From my point of view, it was a large bucket with a lid, but to the initiated this contraption was one of the inner workings required for the engine to work by.

As marine engines don’t have a radiator, the WM takes the engine cooling water – along with the exhaust gases – and expels them out via a muffler and an exhaust hose. The water bucket ensures that excess cooling water does not flow back into the engine (when that takes place, it’s really bad!!!!).

Now reachable, it was now possible for Bob to remove the lid.

Aha!!!! There was the issue, and one he would never have anticipated! Instead of a rubber or metal seal, the manufacturers had in preference installed a plastic item. The water muffler is basically two buckets, mouth to mouth, one on top of the other with a “V” shaped ring that keeps then together and sealed. The whole contraption was made of plastic and the ring had fractured.

The splintering of the ring meant the water muffler was no longer air tight, thereby enabling liquid and exhaust gases to seep through the gaps into the lazarette, which also set in motion the flood pump that in turn dealt with the excess water.

During the process of removing the lid, a series of epitaphs emanated from the depths below as numerous pieces of the seal dislodged to plummet into the murky waters below. Growling with frustration, Bob pumped the last of the water from the bilge and commenced searching for the missing pieces.

It took some time, but successful at last, Bob carefully placed the sections back in position as best as he could, and carefully reset the lid atop.

Up above, in addition to maintaining an eye on those barges, I had also found a good length of rope and passed it on down to Bob. Taking the line in hand, he looped it around the muffler from top to bottom and joined the ends on top. Now firmly cordoned off, it was time to restart the engine.

Back to the helming station went I, and the key was turned. Big Bertha roared to life. At Bob’s instruction, I set the throttle into motion. All good! A bit more power, then a little more. Up went the revs: 1000, 1200, 1500….. Simultaneously, alarms recommenced their screaming, Bertha spluttering and Bob yelling.

I was already well and truly on it as Big Bertha returned to sleep, only I now had water erupting from the gilgoy – or in Bob’s words, the syphon break outlet – as I turned off its tap.

Water mopped, and the pipe placed in a jug just in case of a repeat performance the next time, returning to the lazarette hatch and peering down, it was possible for me to see the one loop of rope had not been enough to deal with the power of the pumping motion that took place as water was propelled through the system.

Out came my love in search of a length of wood: it’s always wise to keep some on hand.

Disappearing once more, it was time for him to commence on repair, take 2.

In the meantime, the first of those barges had attained the point at which action was required. Grabbing hold of the VHF which was placed in readiness, I called the vessel on the commercial working channel (VHF 10). On explaining the situation to the captain, he was more than happy to assist and immediately slowed to a crawl on rounding the bend behind Gratis.

As he sidled closer, his immense size created the suctioning of water along the bank sides, which in turn affected our stationary home. As Gratis commenced gliding silently backward, the lines and pole rapidly lost their grasps. Holding tight to the pole I called out to Bob, who immediately raced out, and arrived as the pole’s hook slipped free. Whilst he worked at finding a new purchase, I hurried to the midship, where I grabbed the bush and held on for dear life until the moving vessel had passed.

Gratis at last immobilised for a second time, Bob returned to his job in the boat’s depths, whilst I now watched for the second vessel that was close at hand.

Having looped the rope around the muffler like one does a present, Bob next grabbed the length of wood he had waiting in readiness, inserted it beneath the joined rope ends and proceeded to twist them in what he called a Spanish Windlass.

Once more, it was time to keep our fingers and toes crossed.

The second barge now positioned a short a minute or two from us and only hidden from view by the bend ahead, not wishing to experience a further dislodgement of Gratis whilst she was disabled, I hurried into the pilot house. At Bob’s instruction, the key was turned, and Bertha thundered into wakefulness.

No alarms or harried yells from below. That was promising!

‘Increase the revs,’ came from the depths.

Bob had done it! Not even a weep.

Out popped he, hatch down, hands wiped.

To the bow went I to release the lines, whilst Bob dealt with the hook. With him at the helm once more, Gratis was gently inched forward. Just in time, too, as that was the moment the second of the commercials Came into view!

Without further drama, motoring at a reduced rate of knots for safe keeping,

we eventually arrived at the junction of the Escaut/Bossuit Canals. Here Gratis was turned left into the entrance of the Bossuit, and with lock gate closed, our girl was eased into the mooring. A twenty minute wait ahead of us – the locks are slow in Belgium – Bob had time to check out his jury rig below. All was well, but with Big Bertha only being worked in low revs serious repairs had need to be undertaken.

Through the lock at last, and locks ahead closing for the night, the decision was made to tie on the mooring placed immediately outside the gates.

Gratis secured, disappearing into the lazarette for the umpteenth time that day, Bob emerged with numerous sections of the water muffler’s seal. Setting up on the table, with epoxy putty in hand,

he carefully pieced the seal together.

Patch up job completed, all we could do was wait until the morn for the final test.