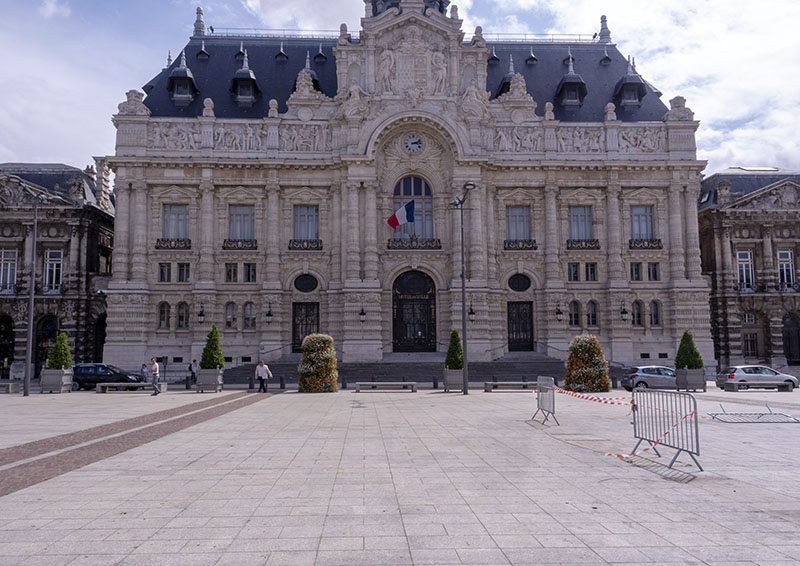 Having spent the most peaceful of nights in this new location, Bob and I awoke to find all was well and nothing amiss.

People passing responded positively to our friendly hellos, answering cheerfully back and some even stopped for a chat. One little ‘un appeared intrigued with the boat and Bob even popped him on deck so his dad could take a pic.

Both Tourcoing and Roubaix experienced a short – lived life of success when the manufacturing trade boomed from the early 1800s through to the 1970s – give or take.

Riding through the townships, some buildings provided an occasional glimpse into the wealth these towns once knew, but the damage caused by two world wars left few standing and loss of jobs as the industries moved offshore saw a serious decline in wealth. That aside, despite the large unemployment rates in both townships a rejuvenation appeared to be taking place, with old factories undergoing the process of renovation as they were morphed into homes and so forth.

There were several museums in Roubaix, but the one which beckoned to us most was La Manufacture. Initially opened in 1914, this was the headquarters of the Craye Company, and was the place where woollen threads were woven into upholstery fabric with great success.

By the 1960s, it was renowned for its Jacquard fabrics, carpets, velvets and medieval Flemish tapestry reproductions.

The Cray company provided work for the locals right up until 2001, when the it was purchased by Flemish Tapestries who continued to keep the factory alive until 2009 when production work was sent to Belgium. Fortunately for us, upon the purchase of the weaving company, the then CEO of Flemish Tapestries had foresight and created the Jacquard Museum within a section of the old production site. It was in 2009 that the collections from the Jacquard Museum were presented to the city of Roubaix, which in turn purchased the old Cray Company’s buildings in order to create the fabulous museum where deafening textile machines of yesteryear are brought to life.

The museum offers tours, but not being in English and Bob’s understanding of rapidly spoken French not at its best, we chose to amble through the site on our own. Upon entering the machine room, the nostrils commenced twitching as that unique aroma connected to working machinery fully engulfed us. Ahead of us, was weaving machine after weaving machine, all well set out with information plaques detailed in three languages alongside.

Although Bob and I didn’t partake in a tour, there was one in action on our arrival. From a distance, we were able to view numerous machines in action. What a thundering noise they produced! Those poor workers would have been totally deaf well before the end of their working lives.

Also here, was a display detailing the town’s people who had worked here. Although entirely in French, the pictorial images and Bob’s schoolboy French enabled us to glean enough information to gain an understanding of what the story was telling. Here we learnt that the Crays even purchased wool from Australia!

Information from http://lamanufacture-roubaix.com (the site provides for Dutch, French and English translation)