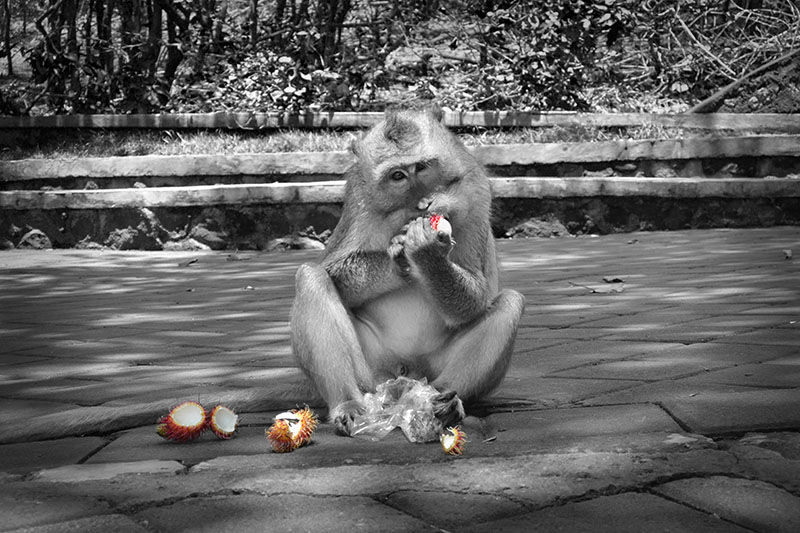 Heading toward Uluwatu Temple today, Bob found his favourite shop, the Blue Chateau – otherwise known as Carrefour. Thankfully, import duties in Indonesia are such that we came out empty handed!

The temple itself is in a beautiful setting. As a sign of respect, one must don a wrap.

Having entered the grounds Bob and I arrived at the sea front. Simultaneously, a message came over the PA system.

Before the message could come to its conclusion, I received an unexpected thump from behind – it was almost like being sucker punched. – and emitted an unexpected scream.

Coming to the realisation that there was a weight on my back and that something was tearing at my sunnies, I rapidly put two and two together from what I was hearing on the PA.

That weight happened to be a monkey (said creature in the above image with his reward) and the creature was in the process of stealing the glasses. Despite being firmly attached to a cord that prevents them from falling off, after some good old tugs the critter won. Next thing we knew, a little lady came up and produced a tasty morsel wrapped in cling wrap from a small bag. She proceeded to toss the package to the monkey who, on finding the new item a tastier option, released the said glasses. Sadly, with the cord doing its job well, the sunnies having been bent have now seen better days. The woman then requested a payment for her assistance.

It’s not a bad wrought. From our observation, it appears the monkeys have been trained, as they only attacked the women, snatching hats or sunnies. We may be wrong, but the experience certainly added a bit of excitement to the day.

Despite the entertainment, Bob and I did enjoy ourselves.