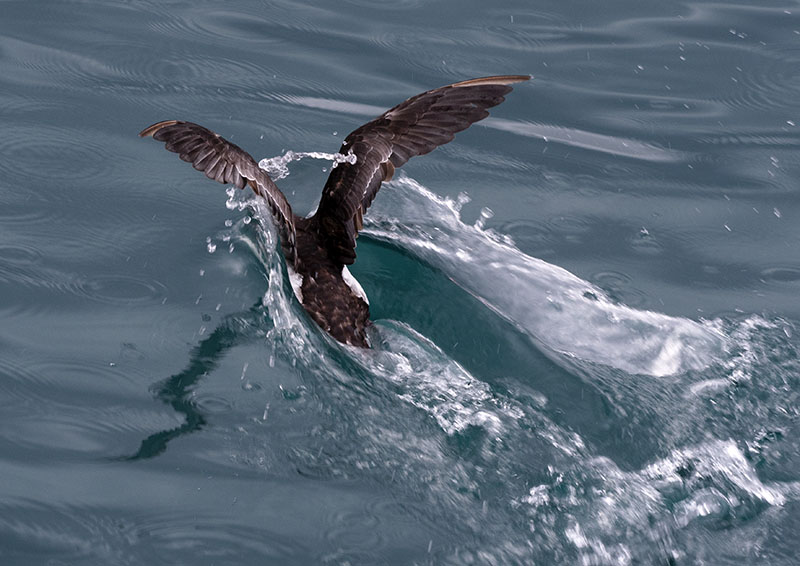 Despite having travelled Norway, remote volcanic islands and more, this New Zealand landscape is the likes of which there is no real comparison for.

Rugged, jagged outcrops atop the peaks towering high above created a time for amusement as we, like children, identified shapes within.

Rocky outcrops burst forth from the uneven seabed below, whilst others lurking a metre or so below created a hazard for those unaware: only the breaking waters provided a clue to their whereabouts!

First penguins, then hundreds of small petrels bobbed upon the water’s surface as they greedily gourmandised upon the juicy, salty sweet delicacies abounding there. For us, not a single nibble!

Stormy skies as squalls passed first along the western shores, then finally altered direction to come our way in miniscule bursts.

Around the corner and well hidden from view was Deep Water Cove. Past three yellow buoys warning of a large boat below, it was impossible to sight the entrance to what would be our well protected cubby hole within the surround sky high mounts.

At last, there it was! But, alas for us, a small cat was already in position. As Cliff edged us closer in, it became evident that the boat had snaffled the prime spot right on the 10m line and right in the centre of the waterway at that point. Because of how the cove shaped in to the point of a ‘V’, with the way he was positioned, there was not enough room for Australis 1 to safely anchor. Our only other option was to anchor in deeper water – the cove was aptly named, but that would have meant the need to use practically all of the 50m length anchor chain.

A short collaboration between the four of us and the decision was made to continue on a few short kilometres to Oke Bay. Worn out by the motion of the swells to a well – rounded anchorage that gradually shallowed into a sandy shore beach, this beautiful bay was well able to cater for numerous boats of all shapes and sizes. It’s only downside was the continuous rolling swell.

What we have found most notable in all of our anchorages, bar that of last night, is – save for the occasional bird sound – the almost deadly silence. In a world totally devoid of silence, for us this is heavenly bliss!