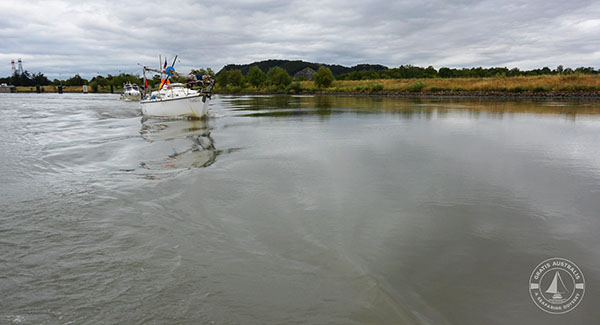 Not such an early start to the day since the lock didn’t operate on set hours. Massive barges entered or exited on a regular basis.

0700, life jackets – they are a prerequisite to entering the locks on the rivers – on, lock light green, and in we went. Long, narrow and 11.3 metres rise, it was like being I the land of the giants. Rising bollards

set in position for the barges, it was only possible to set bow and centre lines.

Having experienced the explosion of water that raced at the opening of the locks upon the Garonne and Midi, it was with immense surprise that we didn’t feel a ripple. Only the silent rising of the bollards denoted any movement.

Lock opened and our journey up the Rhone continued.

Once past the lock, the river flow slowed in comparison with yesterday. Revs at 2000rpm, we maintained a steady 6 – 7km/hr in approximately 4 -6km/hr of current.

River wide, we remained on the outer edge of the current to first maintain best speed and secondly avoid the logs that flowed past with regularity.

It was as though a knife had cut through the land. Now, ranges of low lying hills ran parallel on either side of the river, trees were higher and vegetation of deeper greens. Hillside faces had been cut away, used to create the man-made structures viewed along the way.

Numbered posts provided the cruisers with a gauge to the current river level.

Production plants were dotted here and there along the banks.

Good time was made and after a bridge or two or three,

by 11:11 Gratis was moored in the port of Avignon.

First highlight of the day, the remains of the Saint Benezet Bridge.

Brother Benezet, a member of a religious order whose mission was to construct bridges and hospitals, in 1177 encouraged the town’s leaders to build this stone structure. Within eleven years – an exceptional feat for the time – a stone bridge, 970 metres long with 23 arches had been successfully constructed over the Rhone. This was an amazing first for the time, for never before had a bridge of this type and length spanned a river of raging torrent. Until a major flood in 1669, the order made repairs when the structure was damaged by the river’s forces in the spring thaws. Today, sadly, only 4 of the original 23 arches remain.

The eyes continuing upward, and there was the Palais des Papes (Papal Palace), an overpowering structure set within the walls wall that still surround the town.

For much of the fourteenth century, the French pope elected disliked the atmosphere of the Vatican and moved the Papal rule to Avignon, where it remained for 68 years. Today, Europe’s largest Gothic palace remains a monument to the rule of the seven French Popes.

Entering the town through one of the city’s many gates, dead silence met the ears. Ambling down the narrow street, one was reminded of a ghost town. Coming to the town centre the atmosphere came alive with hustle, bustle and music. With only a couple of hours available, Bob and I chose to wander in order to enjoy it.

Yes, Bob and I are returning for a short time next year.

A rough plan of possible night stops, locks, and fuel.