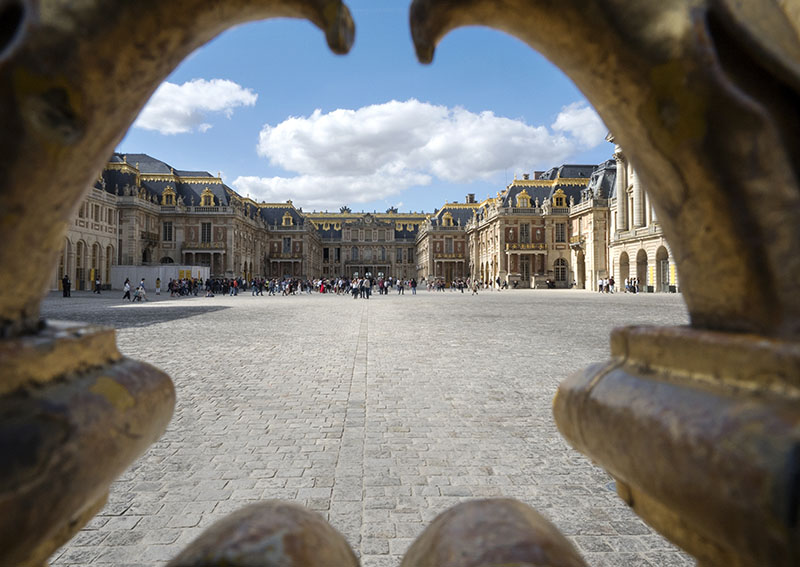 A dream come true for me personally: what a birthday present!!!!

Only 16km from the centre of Paris and easily reached via rail, set on 800 hectares of land, this French Gothic masterpiece with its English styled gardens was the dream child of Louis IV, the Sun King.

lavish and grandiose are all words that come to mind………

Initially a hunting lodge next to the small hamlet of Versailles, this was the private retreat of the royals until Louis IV created what was to become the seat of power. By the time of the revolution there were in excess of 60,000 inhabitants dwelling within the township and palace.

Tickets purchased beforehand, upon a 2pm arrival, we discovered two lanes of people waiting – thank goodness this was the low season – and took an hour to reach the main palace (for those not desiring entry to the palace and other structures, entry to the park itself is free: a boon for those wishing to explore).

Seventy metres in length, chandeliers of glass, upon the ceiling scenes depicting the life of the Sun King, seventeen mirrors with windows overlooking the gardens opposite. The hall of mirrors was beyond belief!

One could easily spend a day in just the palace itself…..

Please excuse the quality of images. With the crowds within, it was impossible to use a tripod of any sort so all were taken on the highest of ISO.

Then there was outdoors…..

Sadly, without notice, due to a water shortage the water show was cancelled at the last minute.