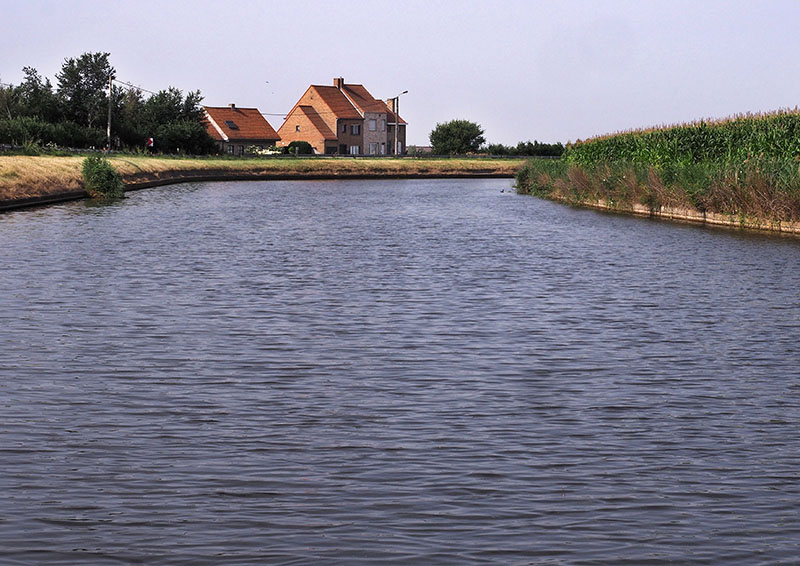 Summer had at last arrived and with it, the duckweed!!!!

With clear blue skies and a heat that rivals that found in Adelaide on a normal summer’s day, Gratis was on the move once more. What a difference to last year’s cold and rain!

In order to visit Ieper (Ypres) and Calais, we have had to retrace last year’s steps to some degree. Many would think this a monotonous task, but for it isn’t. As seasons change, so does the landscape alter and wildlife change.

This day, we continued our travels upon first, the Nieuwpoort – Dunkerque, then Furnes Canals.

Water depths were not an issue this year, although we were travelling some weeks earlier this time.

Depth on the Veurne to French border side of the Kanaal Nieuwpoort – Dunkerque averaged at 1.9m on what is noted in the book as being a 1.8m minimum depth.

There was always an interesting touch of one kind or another to see.

Like last year, on arriving at the first of the French bridges, a slow day ensued. Arriving well before midday is a must if you want to avoid the two – hour lunch break taken by the bridge operators. The image below has the correct phone contact number.

A blue heron? No, this one had a black strip along the outer edges of his wings and was red brown in colour. Maybe it was a youngster.

Wild blueberries on bushes enticed the passer by, but we didn’t want to take a chance in bringing Gratis alongside the water’s edge.

The water level on Canal de Furnes was certainly higher than that we experienced last year, with Gratis only touching what we believe was a hidden log once – in the same place as last year. Unlike 2018 when the average was 1.7m depth, depths experienced this year was 1.9m on a canal that, according to the book, normally has the lowest depth of 2.2m.

Having commenced the trip quite early on in the day, it was possible to complete the journey in a day.

By late afternoon, the first of the bridges denoting entrance into Dunkqerque.

Arriving at the final lock, like last year, the automatic activator set the lock in motion. On exiting, it was a relief to find the duckweed of last year non existent: what a difference a month can make. A right hand turn soon led Gratis to the final lock leading into the main Dunkerque Bassin.

Link to last year’s journey into the basin