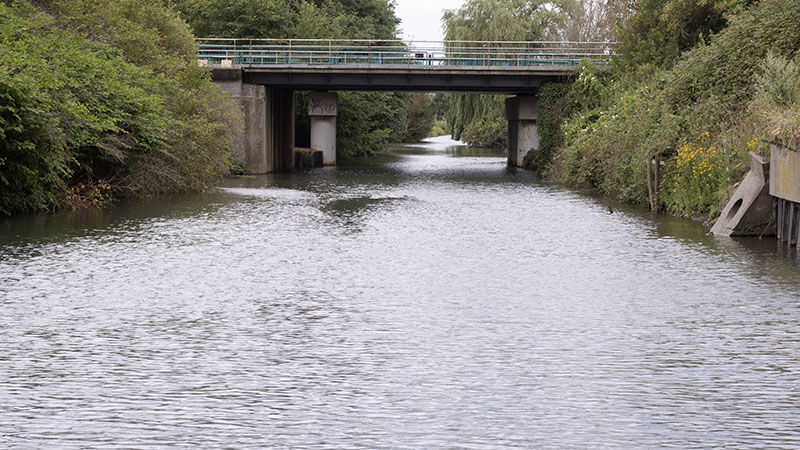 This morning on exiting Relais – Flandre – Artois, Gratis undertook a left turn onto the Canal de la Colme. A short motor that retraced our steps of yesterday, and soon she undertook a second left took us on a 4.5km journey upon the beautiful River L ‘Aa.

Arriving at the junction, to continue on the l’Aa would take us to Gravelines, but water levels were way too low. Instead, Gratis undertook yet another left onto the Canal de Calais (in green on the map below).

Arriving at the first of the locks, we discovered no one there, and the phone number on the board and in the book to be incorrect.

Making a phone call to the lock just outside of Dunkerque, Bob was put in contact with the people in charge of the Calais waterway. They had to come down from Calais! The lass, when she arrived, was a real delight.

Guess who was impatient?

A few bridges, and it was time for a two hour lunch break. Yes, our decision to leave the last 30km for this day was a good one. We also found it would have been possible to spend a night there: no shore power though.

Room for a barge and a big fat boat?

With Big G squeezed as close to the banks as possible, only just.

Glimpses from times past

There was even the occasional artwork.

Over the coming hours, a pleasantly slow motor this day eventually led us through the outer suburbs,

before leading us onto a section of the old canal that once fully surrounded the medieval township of Calais.

By now late afternoon was well upon us: the long wait for the opening of the lock at the commencement of journey and a two – hour lunch break had put us well behind our predicted time of arrival in the Calais basin.

The tide now low, it would be early morn before the lock would open and allow us to pass into the tidal Calais harbour.

A suitable mooring area available for visiting boats unavailable, we had choice but to moor alongside the old sloping moat wall.

To protect Gratis, the fenders were lowered before Bob pointed the bow shoreward, thereby enable me to throw the rope over the bollard.

No allowance had been made for small craft spending the night. In the end, we made the decision to attach the stern line to a ladder inset within the wall, and the bow line to the bollard.