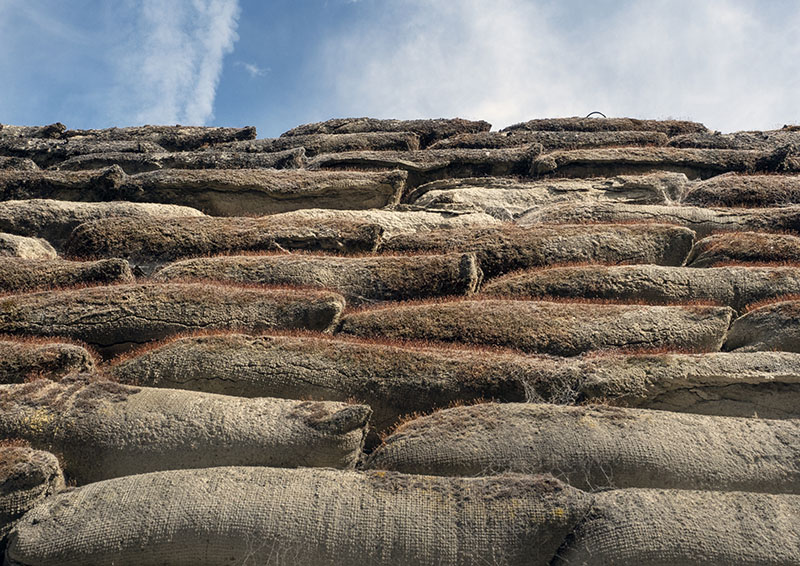 Having exited our night’s berth, I turned Gratis away from the lock and motored her to the bottom of the marina. Turning to her to port we followed the channel down to the entrance of the Ijzer.

Our destination of Diksmuide was only a couple of hours motor down the track.

and a couple of white swans made this section of waterway where tall willowy reeds grow home, whilst the fish crazy fishermen sat upon the riverbanks.

A few kilometres from Diksmuide, Gratis passed this water height measure – called pegels in Germany, it is Niveau in Dutch. Here it was possible for us to realise how far the level had actually dropped: a good ½ metre in recent times.

This is the region of Flanders made so famous for its bloody trench warfare during WWI, and it was here that John McCrae’s famous poem, ‘In Flanders Fields’ was written.

In Flanders fields the poppies blow

Between the crosses, row on row,

That mark our place; and in the sky

Scarce heard amid the guns below.

We are the Dead. Short days ago

Loved and were loved, and now we lie,

Take up our quarrel with the foe:

To you from failing hands we throw

The torch; be yours to hold it high.

If ye break faith with us who die

We shall not sleep, though poppies grow

A Canadian doctor, he composed the poem after the death of his friend, resultant from a gas attack in May, 1915. He himself also passed away after suffering from the malicious  effects of this warfare chemical.

On arrival at our destination, we chatted with the locals and were informed the waterway on which we were travelling was dredged last year, hence the large discrepancy in depth between what we were experiencing and that of 1.8 detailed in the book. For much of the distance, depth sat around the 2m+ mark, but that aside, the Ijzer is a river, and already there were occasional spots where it dropped to 1.8 for a fraction of time.

The locals also provided a little more info on the Kanaal Ieper – Ijzer. This last section of 15km into Ieper (Ypres) had not been dredged. In Diksmuide, the story goes that the people dredging believed there are still undetonated bombs laying on the waterway’s bed and refuse to do so – if this is truly the case, we don’t blame them. That aside, there is hope, for we were also informed that the first 7km up to the first bridge of the canal is ok for Gratis. With a mooring area provided, we could make that our base for the Ieper section of this year’s journey. (We questioned this theory, however, as the waterway underwent reconstruction work after the war).

Now to Diksmuide. With its friendly people, pleasant vibe and lovingly restored buildings, we really love this town.

Since the 1200s, the market square has been a trading place. This afternoon, Bob and I purchased the largest chicken I had seen since a young child – when cooked, that was just as succulent as the fruit, and the juiciest, sweetest strawberries I have tasted since Dad last grew his own at the Farmers’ market.

‘Little Man from the Moon’, a symbol of Flemish humour.

Initially constructed in the 1200s, the Beguinage set just behind the canal of the town, was rebuilt after the destruction of WWI. Having died out in Diksmuide, no Beguines ever resided in the new building: instead, it became first an aged care home and today a home for the mentally disabled.

Sint Nicolas Church commenced its life as a Roman Chapel. In 1333, there was a town fire,

after which it was reconstructed and became a Gothic Church. 1914, found it destroyed yet again.

Named the Handzame Kanaal, this created the boundary between township and rural. During the thirteenth century, the township became a busy port and it is still possible to sight mooring rings, stairs and

on a side street was the old fishmarket, complete with sculptured fishmongress.

The town hall that had been constructed in 1428 couldn’t survive the destruction of war and that which stands now was rebuilt in 1923 in the provincial Flemish Renaissance style.

It was also worth wandering through the back streets where architecture was interesting,

sculptures attracted the eye whilst

We loved the back of this car,

and the window decorations,