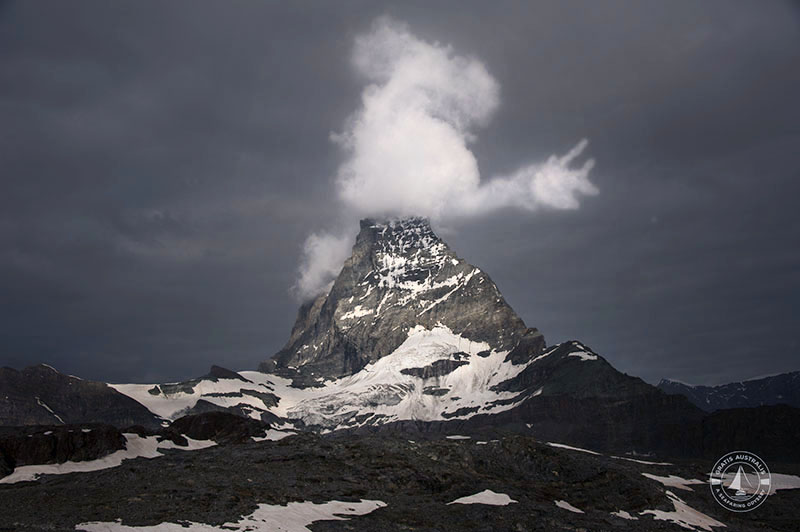 There was a slight chill to the air when we arose at the crack of dawn. There was method to our madness: viewing the Matterhorn in the glow of the rising sun.

Into the first of the three Matterhorn Express cable cars in we went.

This leg carried us from Zermatt

to Furi (a quick stop whilst some departed) then on to Schwarzee which rested at an altitude of 2583m.

The views were spectacular: valleys of green, pine forest far below.

glaciers of dirt brown, lakes, rocks of iron – what colours!

All the while, the might of the Matterhorn rose higher still. Last night, cloudless, this morning, cloud rose to surround its peak as the change came through.

Disembarking at Schwarzee, Bob and I boarded the second car that conveyed to us to Trockener Steg. Snow becoming more prevalent the higher we rose,

carried across the greyest of lakes,

we soon arrived at the station which was situated at a height of 2,939 metres. All the time, the incredible Matterhorn- at a height of 4,478 m – was in view. Here we stood only 4km from the peak.

As the glacier here recedes, incredible finds that assist in detailig the past of Homo Sapiens Sapiens. Neolithic stone axes, remains of people and more…..

It was at this point that Bob and I boarded a massive red cable car. This was to take us on the last leg of this amazing journey to the Klein Matterhorn that peaked at 3883m in height. The highest cable car station in Europe, it carried its passengers up to a thousand metres above the ground as it travelled across the glacial wonderland. Here one could view at first hand the effect our warming climate has upon this coldest of climates.

Up, up and up the car inched, with the onlooked wondering how the devil it was going to make the steepest of climbs in its endeavour to arrive at the last of the stations.

Disembarking, chilled to the bone, arms entwined around our bodies in an endeavour to maintain warmth, Bob and I entered the longest of corridors. Hurrying along, we at last entered the encompassing warmth of the restaurant situated at the end.

A warming cup of coffee purchased, we sat down to enjoy the view.

With no scarf to entwine around my neck, the chill air had permeated though my airways. Now experiencing minor breathing difficulties, I remained in the restaurant, whilst down 15 metres into the Ice Palace below went Bob. Within a click of the fingers, he returned. The numbing cold below had worked its way through his bones, so his viewing of the carvings was probably the fastest in history.

At this height it was possible to head out on a viewing platform from where the visitor could view admire the southern face of the mountain. Unfortunately there are no pics taken from here: it would have been madness on our behalf!

In an aside, Bob and I made the decision to head to the Matterhorn on a whim of the moment. A chance comment, a quick squiz at the map and our plans changed at the click of a finger. It was too good a chance to miss. Decision made, we gave no thought to the chilling conditions we would encounter and what clothes would be most suitable to wear. In fact, we had nothing suited for icy cold conditions. This was a height of summer’s day, and we experienced 0°C and less. It’s a good idea to prepare one’s trek to the top – even if it’s in a cable car!

Following the return journey that proved to be as fascinating as the first,

we collected our bags, and boarded a train for the return trip to Tasch. Back in the car, it was time for the day’s trip to Freiburg.

After a couple of wrong turns along the way, we at last arrived at Kandersteg, where we discovered not a road, but the Autoverlad Lotschberg. This was where travellers caught a train that would carry them – seated within their vehicles – through the mountainside of the Alps via the 14.612 km long Lötschberg Tunnel, to Goppenstein in the neighbouring valley.

The construction of the original tunnel, we discovered, commenced in 1907. An avalance raising the accommodation in which workers resided, and opening the tunnel into a glacial fissure – this last caused massive flooding and meant the tunnel had to be redirected after a large section was sealed – delayed  a successful breakthrough until early 1911. What a feat!!!! A further two years on, and the tunnel was at last completed. The inaugural train entered on the 5th July, 1913.

What an experience, this second highlight of the day proved to be!

Waiting in line, we watched as the cars ahead were driven into the cattle like carriages in single file.

Inching forward, it wasn’t long before our turn to board arrived. Car in first gear, Bob slowly followed the tracks until we were just behind the vehicle in front.

Coming to a halt, the brakes were engaged and ignition turned off.

With a blow of the horn and a sharp lurch or two, the train’s wheels commenced turning, pulling the carriages along in tow. Through the valley it went, whilst we enjoyed the view from a different perspective. Avalanche snow bridges, a bit like wooden gates in appearance, set at angles ranging between 45° and 75° were dotted across the slopes.

Travelling along the steady downhill gradient, the tunnel opening soon loomed ahead of us. Pitch black, no lights, the only senses left to us were those of sound and smell. One now learnt what it meant to be blind!
Ever downward we travelled.
A sudden building of pressure in the ears, followed soon after by a thumpety boom which crept gradually closer. Blinding light lit the tunnel then, in a rush of noise, a second train flew past! With its passing, the air pressure within the cavity returned to normal in increments, and the passengers carpeted in pitch black nothingness once more.
That twenty minutes rapidly passed, and we soon erupted into blinding daylight where the sight of the Jung Frau greeted us.

Arriving at Goppenstein Station, the exiting process took place, and we were soon on the road, destination Freiburg im Briesgau in the state of Baden – Wurttemberg.

Situated on the western fringes of the Schwarzwald (Black Forest) this town, whose name literally means ‘free castle’ was settled in the year 1120 as a fee market town.

Sadly, much of the medieval city was destroyed by the Allies towards the end of WWII. That which remains has been lovingly restored, enabling the Altstadt to retain some of its old world charm.

Late afternoon upon us, Hotel Blume was our destination. Visiting the old town could wait until the morn.