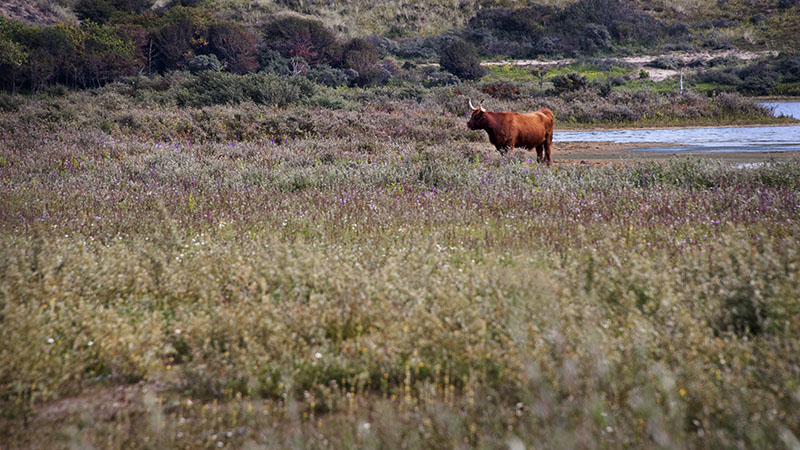 There are natural hills in the Netherlands, believe it or not!

Not large ones of course, being only hillocks, but enough to make one’s legs a little wobbly if not enough bike riding has been undertaken, and just 8km out from Haarlem in Zuid Kennemerland National Park!

Having arrived, whilst wending our way along the bike paths,

Bob and I discovered the landscape of Zuid Kennemerland is vastly to any seen thus far.

With a base of calcareous sands that form a scene of never ending dunes and valleys, the 3,800 acres incorporates a multitude of microcosms that the visitor best take numerous days to explore by foot. Shading forests containing varying species of tree such as pine and acorn, tiny wildflowers still in bloom,

undercover in which the smallest animals could hide were passed through in a fraction of time,

and a lake or two upon which waterbirds idly drifted and where cattle lazed.

Closer to the sea, were dry sandy lake beds that would come awash in a flooding rain: if the imagination was allowed to run wild, it was possible to envisage the sight in days of old, as the waters poured in and now extinct fauna extinct came to feed.

It is the variations in elevation, earth, climatic conditions and water levels that create such a diversity of microcosms to exist.

What surprised us was the deafening silence. Bob and I were well into the park before the first tiny bird call was heard. Our presumption was that if a person sat, stopped, watched and listened long enough, he would be surprised by what would be seen.

So used to people, the cattle took little notice as they meandered along the verge grazing.

What Bob and saw today was the tip of the iceberg, and left us wishing to see more……..

Even the return trip to Haarlem vai the main road provided some interest.

With the effects of acid rain cause by our world of today, the acidity of the dunes has increased as a result of the calcium within dissolving at a much greater pace than prior to the industrial revolution. The Burnett Rose and numerous other plants are on the endangered list, whilst the grasslands

are now flourishing and threatening to take over. The decimation of the rabbit population through the advent of disease hasn’t helped matters, either. Counteractive measures have been taken, with the introduction of grazing animals such as cattle,

to the park, the express intention of taking the place of the rabbits in order to prevent the growth of the grasslands.

‘The encroachment of grasslands is threatening the (bio-) diversity of the landscape so to counter this a number of large grazers have been introduced: cattle, horses and ponies graze in large areas of the National Park. In 2007 wisents (a relative of the cow) were introduced to Kraansvlak, a

closed part of the National Park. These grazers eat grasses and hard dune reeds as well as the vegetation on shrubs and trees and they trample vegetation, the combined effect of this frees the dunes to shift. The large grazers are aided by small herbivores such as rabbits, roe deer and fallow deer in keeping the dune landscape clear. This provides much-needed space for characteristic flora such as dune pansies, thyme and blueweed.’

From the Zuidkennemerland pdf pamphlet

Well worth the read!

Read all about the eco ports and more….