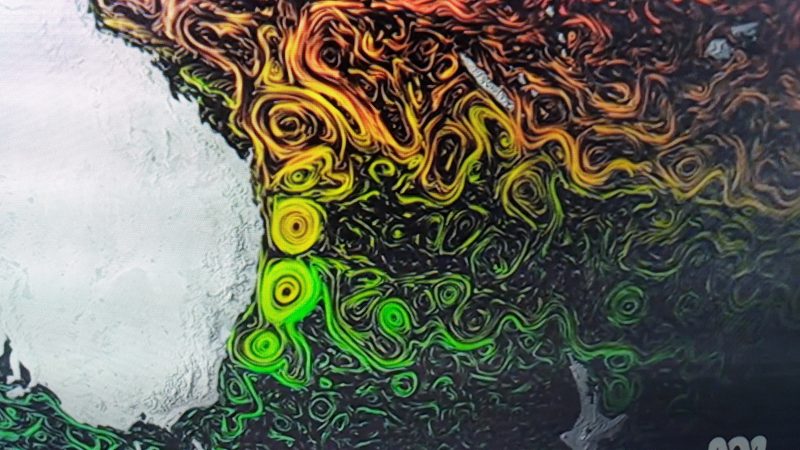 Disbelief, as just before dawn, the auto pilot, decided it was no longer able to cope with the conditions made and experienced non – stop hissy fits.

Two hours or so of constantly dealing with constantly correcting large directional errors that took place as she gave way, the decision to go to manual control was made: shock, horror!!!!!!

We – or the guys, anyway – actually had to work!!!!!!  The position of the wheel was set for a tall male and being a couple of shorties made helming difficult for Anne and I at the best of times (I stand on a stepstool). When combined with the power of the seas upon the rudder, that meant we women just didn’t have the strength to control the helm, so it was one hour stints for the men, whilst our job was to keep watch.

During his short breaks Bob continued playing with the AP settings, all to no avail, so with gusty wind conditions – they had lightened significantly- and now truly messy seas, steerage was continued under manual control with use of the AP for short stints where possible to provide a well – earned break.

There was time for a laugh when the nonslip placed beneath the seat cushions proved no exception to the pull of gravity as we watched a snoozing Anne – cushions, pillow and all – plummet floorward when one strong push from Father Neptune sent Australis 1 rocking and rolling. Arms and legs flailing, she became increasingly more tangled within her warming blanket. So it was, that a short times later Cliff found his struggling fully entombed wife blocking the hatchway as he came topsides. Some adaption is certainly required here!!!

Anne and I had battled sea – sickness the entire journey, something totally unheard of! Generally, three days and we were fine. It didn’t help that I was unable to keep my head down long enough to search the fridge, so it fell to my love to do so. According to him, our famous pills had taken a walk so Anne and I battled on. With conditions not improving and sick of feeling unwell,  this night, enough was enough! Taking the bull by the horns, I took the plunge and ducked my head down into the fridge. Exactly where I had placed them, there were the miscreants! Right where I had directed my love: left side of fridge, at the front, in the basket in the small bottle with the white lid. He had taken a boy’s look!!! Grrrrrrrr……..

A good thing it was that they came to light, as poor Anne finally succumbed. At long last, each of us with one in our systems, Anne headed to bed for recovery, whilst I returned to the cockpit for my turn on midnight watch with Bob.

What a milestone we had attained this night!! On totalling the numbers, despite slipping, sliding and constant correction against the force of the waves, a total of 139nm in a 24 hour period and Australis 1 was just past the half way mark!! All done under a third reefed main and number 3 jib: this girl could move!!

Whilst watching the men battle with AP and the sea conditions, I had come to the realisation that I could identify the exact moment at which the auto pilot gave way. During this shift, I took over managing the system, thereby enabling Bob – and later Cliff – to focus on helming. It didn’t take long before we were working like a pro team. The procedure went something like this. AP lost, I would turn off the control whilst simultaneously saying ‘off’. The person on helm would immediately take over, put her on track and give the command ‘on’, at which time AP was reactivated. This rapid reaction time diminished the degree of direction Australis veered from her course, which in turn decreased the amount of effort the men were putting in, which invariably reduced their level of fatigue.

I’m afraid there were no still images taken this day. It was all we could do to hang on. The image above was taken from the TV when I was watching ‘Australia’s Ocean Odyssey: A Journey Down the East Australian Current’. It was perfect for it detailed the currents that create the interesting sea conditons.