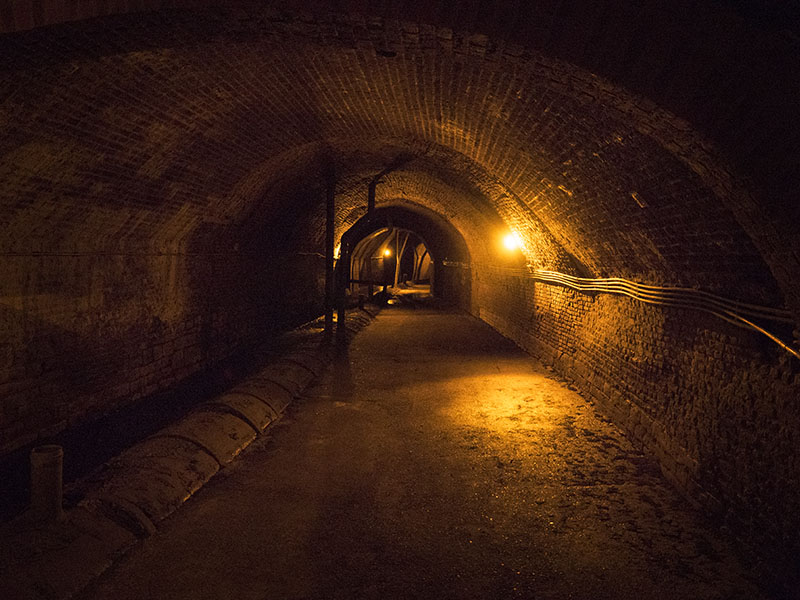 First thing this morning, the water came alive with the sound of the young as they prepared the steel dinghies

and took to the water.

Our last day in Bergen op Zoom finally presented us with one of sunshine and we made the most of it.

At the Ravelijn Op den Zoom, Bob and I found remnants of the fortress town’s history. Surrounded by water, the ravelin was the pentagonal section of fortress that extended outward from the main structure. Constructed in 1702, included in this section of building were small rooms – casemates – with openings through which weapons could be fired, cellars in which cannons were stored and underground tunnels.

During the renovations that took place during the 1930s, a wooden bridge rather than an earthen wall was constructed to allow entrance through its gate.

Our tour of the museum, Het Markiezenhof

– the oldest city palace found in the Netherlands – provided some new perspectives. The medieval residential palace of the marquises as far back as the late 1400’s, many renovations took place over the centuries to present us with this beautiful heritage structure today.

A massive display of the surrounding region spread almost entirely across one of the rooms. The image below is just a small section focussing on the township in its heyday.

There was a 3D scale of the tower as it once stood.

Rooms were beautifully laid out.

How was this for a chair!

A short hologram show focussed on one generation of the ruling family.

We loved the floor dedicated to the moving picture. There was even a short film to watch.

Wax scenes depicted some of the real life events experienced. I can actually remember the stories my Dad told of having teeth pulled without anaesthetic.

And delighted in the room set up to detail the history of fairs.

The majority of the displays still worked.

In the tourism office, this display of books was completed with a small copy of the figurine that sits atop the palace tower.

The ‘Grebbe’ was our last port of call, and was one of the highlights of our time in Bergen op Zoom. Taking one and a half hours, and including an introductory video show, it was well worth the time. Spoken in Dutch, the tourism office – where we purchased our tickets – very kindly organised for an English translator to walk with us at the back of the tour, so Bob and I didn’t miss out.

Initially excavated as narrow drainage channel during the 1200s,

its usage altered over the centuries.

With the coming of the fourteenth century the peat industry rose to its height. To enable the cartage of the peat from the region north of Bergen op Zoom, the Grebbe was both widened and deepened to enable passage for the small barges.

Four centuries on, utilised as a drainage port by the brewers, for washing by the cloth weavers, dyers, bleachers and so forth, the water had become a repugnantly polluted sewer.

As the population of the township increased, available space for use became non – existent. During the early 1400s, the palace created a precedence for covering the Grebbe when a section of the putrid canal was covered to enable to the construction of a new courtyard.

From this time on, the canal ceased to operate as a transit route for the peat barges. Business owners had the opportunity to purchase a section of the Grebbe and over the coming years buildings, streets and bridges were erected over the waterway.

Over the centuries, human waste affected the stone structures that had become the sewer and renovations were required. In the last that took place during the early 2000’s, the Grebbe’s historical significance was recognised, as such major repairs undertaken. All homes that run along the sewer’s pathway are connected to a massive pipe that was placed upon the base, ensuring that water only runs through the ancient channel during times of flood now.

The slide show finished, along streets situated above the Grebbe, the group was led.

I just couldn’t resist taking a photo of this.

There was a story that only happy people were allowed. If grumpy, you were placed in the Grebbe. When walking past, people would stomp on the manhole plate to ensure the inhabitants below were still there.

Steps once led into to openings that were entered through cellars in the homes. Today, the entrances to these have all been blocked.

There was even time for some humour.

The Zuiderwaterline festival also took place today and is celebrated by the towns situated along the Brabantse Wal. This is the hill created by the elements at the junction of two soil types, thereby protecting all from the influx of the sea for much of its history. Including musicians, poets, dancers and more, the opening in Bergen op Zoom takes place at the Ravelijn. Unfortunately, temperatures were quite low, and with the festival’s commencement not until 5pm, Bob and I chose not to emerge into the wind and chill air at that late hour of the day.

There is plenty more to see in the region, including a national park situated on the Dutch/Belgian border, but we have left that for another time.