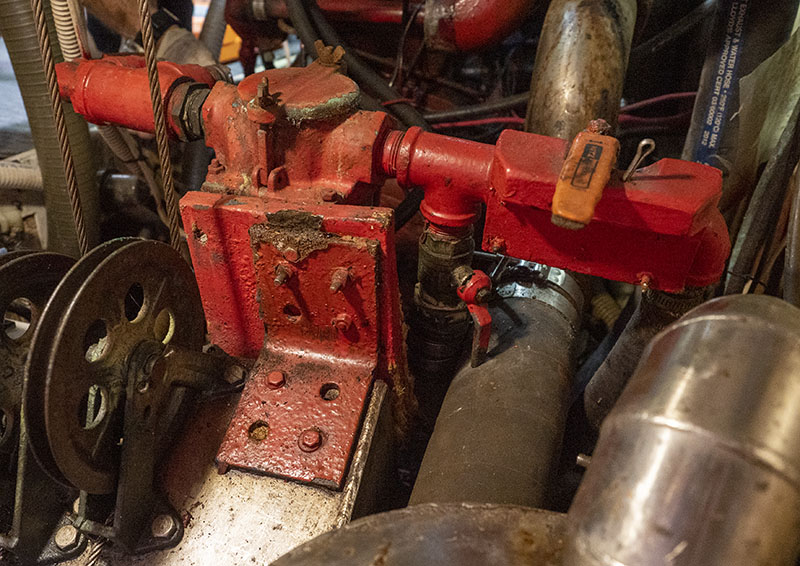 The remainder of yesterday found Bob working on the removal of the gearbox, a process not as easy as one would imagine.

Not familiar with the system and how it was interconnected, this was a slow steady process, as one misstep could cause a flood of seawater surging onboard, or a critical part severely damaged.

A regular check with the manual or phone calls to Pete or the experts on the motor system were helpful most of the time.

First off, the seawater filter had needs to be disconnected and removed.

Next, the gear box was readied for disengagement from the prop shaft and that’s where the headache commenced…..

On attempting to push the prop shaft back and out from the gearbox connection, there was no sign of movement.

Thinking that maybe the prop shaft’s anode was the problem, over the side went Bob.

Nope, that wasn’t the issue.

Back to the drawing board went Bob.

In excess of two hours later and now almost 6pm, Bob had advanced no further and it was time to call it a night. On the morn, looking at things after a good night’s sleep might bring to mind new ideas…….

Well, Bob had a good night’s rest and was back in the engine room early this morning.

With use of levers, it was a slow process,

and it wasn’t until just after lunch that he finally experienced success.

It was then time to put in place the pulley system. This took the weight of the gearbox as Bob released the final bolts and would enable the lifting of the item that, in reading, Bob had discovered weighed a good 80kg.

A phone call to Pete, who had offered his services the previous afternoon, it was a matter of waiting until he knocked off work.

With the arrival of Pete, the final stage of the process progressed rapidly.

A final check of the pulley system and it was time for the careful removal. A misstep and serious damage could be done to the other structures around it.

With the initial pulley not heavy duty enough, a new one was put in place.

With Bob pulling on the rope, whilst Pete guided, up the gearbox came.

Up and up it inched,

until at last it rested on the cockpit floor.

Now putting in place the halyard system we utilised the day of the washing machine removal, with the additional hands of our neighbour the final lift from boat to pontoon was a simple exercise.

For the moment, the gearbox resides in the boot of the car, awaiting transport to the specialists for an overhaul and repair.