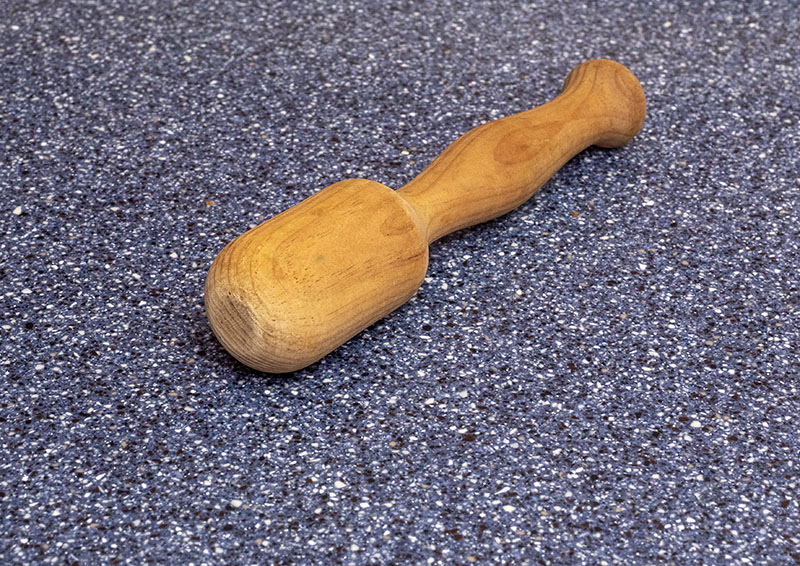 I have never owned a mortar and pestle, determining the expense just not worth while.

On my exploration and rearranging of items within the cupboards, I came across one hidden in the space below the oven. Vibrantly bright in colour and large with two handles jutting out from the side, I chose to leave it there and mull over where best to make its new home.

Knowing Bob would more than likely go there during his checks of the electrics and so forth, I was most diligent in letting him know………

Now we move on to today, when I chose to give that mortar and pestle a go.

To the cupboard went I.

Upon opening, there was no sign of that vibrant blue and orange bowl. Getting down on hands and knees, I peered in for a closer look, just to make sure.

‘Okay, where has he put it’, was the initial thought going through my mind. Having been in all cupboards as recently as the day before, I really wracked my brain as to where said item could be and kept coming up with nada.

Despite this, over the coming minutes cupboard doors opened and closed, with each closing becoming a little louder as I became increasingly frustrated.

Some time later, my search came to a desperate end, as the thought, ‘No, he wouldn’t have! Surely not!………….’

Out popped his head from the engine room.

‘Have you seen my mortar bowl?’

‘My mortar bowl. It was in the cupboard beneath the oven.’

‘That was for cigarette butts’.

I practically had an apoplectic fit as my jaw dropped to the floor in disbelief.

The punch line came as I queried as to where it was now.

Truly believing it was a bowl for cigarette butts, my beloved had simply tossed that most unusual of mortars.

Once again, I am mortarless, but on the up side, I still have the pestle.