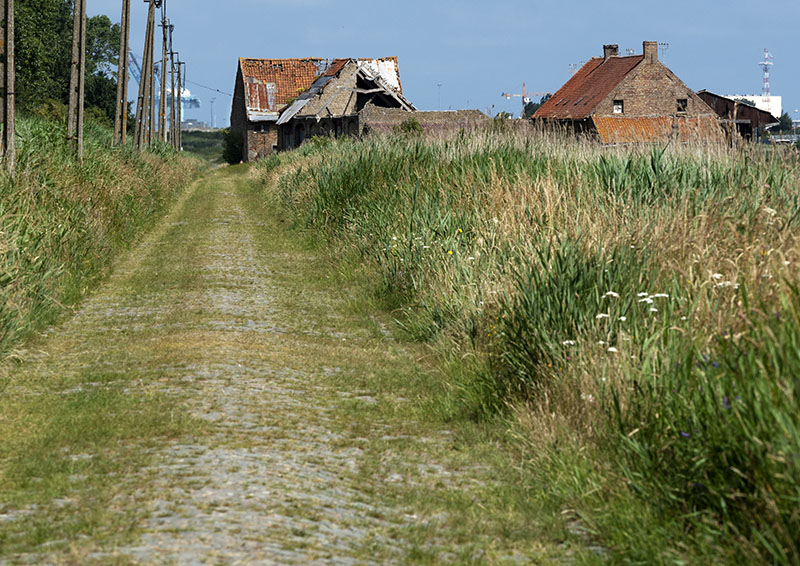 One of Bob’s wishes was to visit Zeebrugge where he could explore the marine shop and marina. Today was it! Roughly a 30km round trip, the weather was in our favour.

The township, itself really was a true seaport town that, from the number of shops and apartments closed, appeared to be experiencing a slump in the economy.

The highlights of the day were experiencing a ride upon the remains of the old cobbled road that ran along the Gent – Brugge canal,

finding some delicious locally made Belgian chocolate (the factory was right in the township), and sighting two storks sifting through grass in search of the perfect material for their nest – or so we thought.

Whilst editing, I blew this one right up, and you won’t believe what I discovered:

they were eating baby rabbits – or we should say, swallowing them whole!

We also found a very nice restaurant, Bistro de Kombuis in Tijdokstraat at number 4 (http://www.dekombuis.be), that served superb food. Bob enjoyed his sole, and myself the pork chop. The potato chips were sublime.

– an outer port on the Belgian coast;this place was called “Zeebrugge”, i.e. “Bruges-by-the-sea”;

– a sea canal from the outer port to Bruges;
– an inner port in Bruges itself, situated north of town.’

History of Zeebrugge from: http://www.portofzeebrugge.be/en/port/history